To finally fulfill a dream I have had for so long brings me great joy. I have tried to briefly capture my foolish wishes in a five-character poem:

The most famous site at Bodh Gaya is the Bodhi Tree, under which the Buddha sat on the night of his enlightenment. But the Buddha is said to have stayed there for seven weeks, contemplating the meaning of his enlightenment and deciding whether he should teach the world what he had understood. According to a famous story, he was resolved not to teach because what he had understood was too profound for the benighted beings of the world. Then the god Brahma, the most powerful of the gods, descended from his heaven to implore the Buddha to teach—even the gods did not know the path to liberation from suffering and rebirth. Brahma conceded that beings with much dust in their eyes, their ignorance obstructing spiritual progress, would not be able to understand, yet those with little dust in their eyes would be able to benefit from the Buddha’s teachings. The Buddha therefore decided that he would teach. Feeling that the first to hear his teaching should be the five ascetics who had rejected him when he abandoned their practice of fasting, he set out to find them. They were in the Deer Park at Sarnath.

According to Buddhist scriptures, the vajrasana, the seat underneath a pipal tree upon which the Buddha meditated and attained enlightenment, is the navel of the universe, untouched by the cosmic cycles of destruction and creation. There, beneath the same Bodhi Tree, it is said that all future buddhas of this world will similarly come to sit and rediscover the eternal truths of the dharma, in the process defeating Mara, the god of death and desire. For Hyecho, arriving at this sacred place in the dusty Gangetic Plains of eastern India was the fulfillment of lifelong dream. But what did he see when he arrived? Inscriptional and archaeological evidence found at Bodh Gaya reveals a site perpetually in process. In addition to the countless stupas and sculptures that were donated to the temple compound over the centuries, the shrines dedicated to the Bodhi Tree and the vajrasana underwent several major transformations, including renovations sponsored by the Buddhist kingdoms located in modern-day Myanmar and Sri Lanka. Hyecho records only what he feels, not what he sees when he arrives at Bodh Gaya; but the detailed account written by Xuanzang a century earlier approximates what the Korean monk likely witnessed. The Chinese pilgrim describes a temple over 150 feet tall ornamented with precious metals and gems, its walls decorated with gilded Buddhas and other sculptures.

When the British first encountered the site in the nineteenth century, they found an active temple dedicated to Vishnu in severe disrepair. Inspired by the account of Xuanzang, Alexander Cunningham, founder of the Archaeological Survey of India, sought to restore the Mahabodhi Temple to its former glory. Drawn from a variety of archaeological and textual sources, the renovated building is fraught with architectural misunderstandings and anachronisms, but the vajrasana, a cutting from the Bodhi Tree, and a massive sculpture of the Buddha remain, making the site once again a major destination for Buddhist pilgrims.

Although much has been rebuilt and reconstructed at the Mahabodhi Temple in Bodh Gaya using materials recovered from the site, many of the sculptures and votive objects discovered in the nineteenth century by Cunningham and the Archaeological Survey of India have found their way into European collections, especially in England. Under very different circumstances, objects from the Buddhist Holy Land often circulated abroad, traveling home with pilgrims to the far corners of Asia. While some objects were left as offerings, others were brought back as blessed souvenirs. 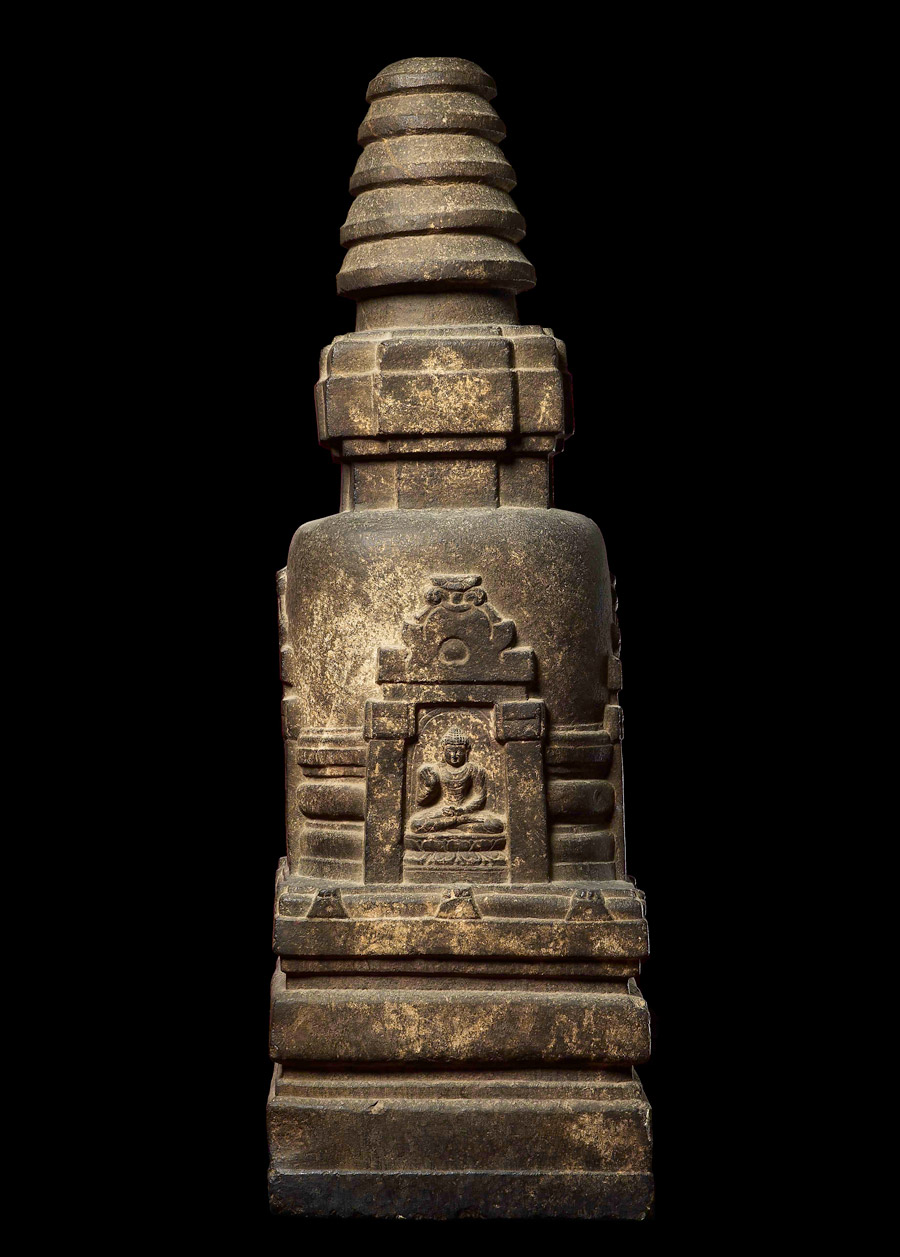 Stupas figure prominently in Hyecho’s observations. The first Buddhist stupas in India are said to have been constructed as hemispherical reliquaries containing the Buddha’s bodily relics, which were distributed among his followers after his death and cremation. Monumental stupas were important places of pilgrimage and worship, as well as markers of the eight important sites related to the Buddha’s life. At holy places across the Buddhist world, the devout donated smaller votive stupas as a form of worship and a means of making merit. Bodh Gaya is no exception. Over many centuries, pilgrims offered hundreds of stone votive stupas like this one, each carved in the east Indian architectural style of the moment. Some even contained the remains of donors’ loved ones, bringing special blessings for good rebirth. This stupa, with buddhas in niches on all four sides, dates to the period when Hyecho visited Bodh Gaya. Although this was likely an offering beyond the means of a young monk, he undoubtedly saw many stupas like this one. 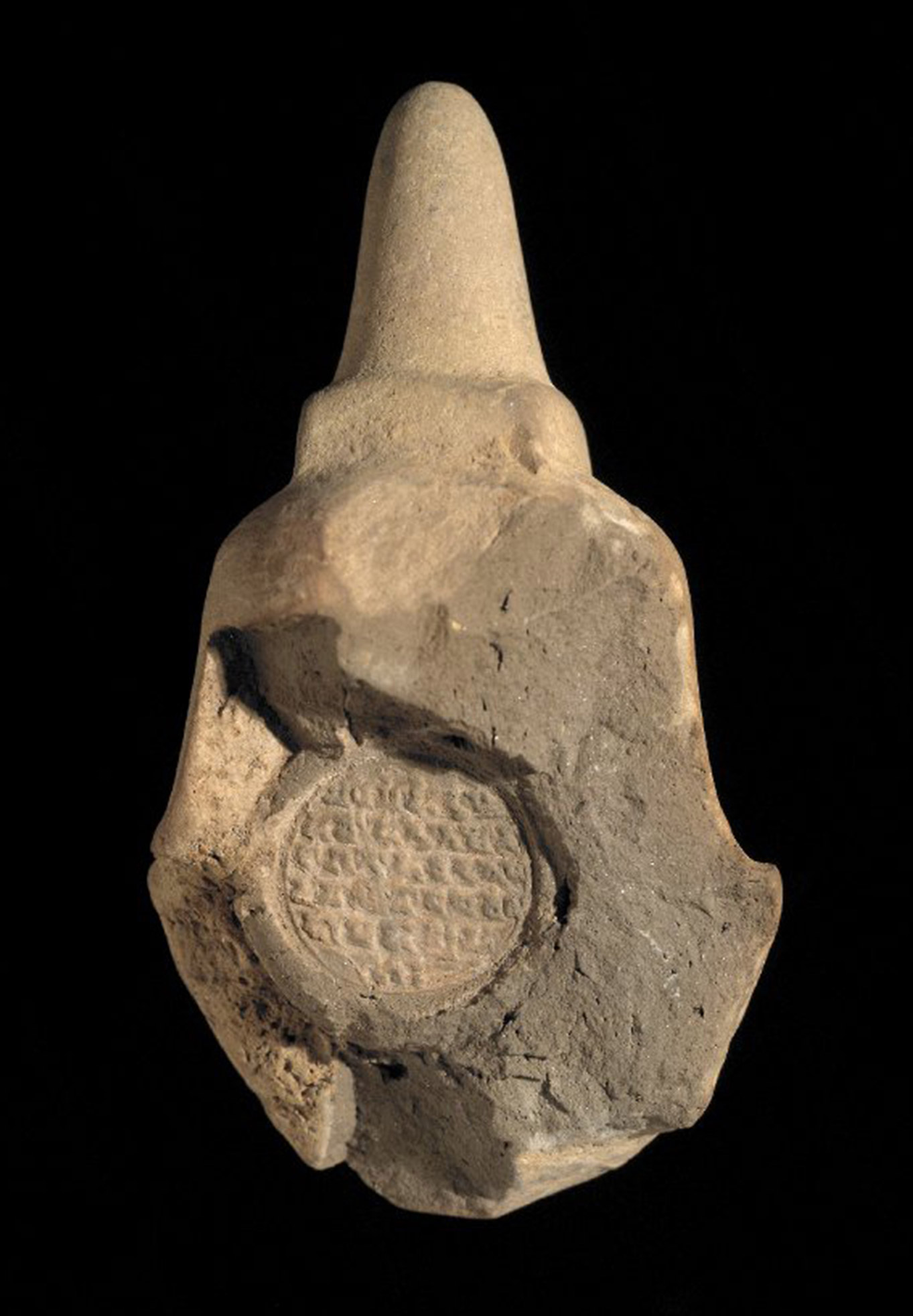 No matter their size, stupas are infused with sacrality, both symbolic and concrete. The form itself conveys many meanings, but when consecrated with a relic of the body or speech of a buddha, it has the ability to give blessings and produce merit. For Buddhists of meager means, small stupas molded in clay were an ideal and affordable offering available for purchase at Bodh Gaya and other sites. The seventh-century Chinese pilgrims Xuanzang and Yijing both record the pervasive practice in India of making and offering such clay stupas. At Bodh Gaya alone, Alexander Cunningham reported finding hundreds of thousands of these objects, including this one, which he donated to the British Museum in 1887. Its missing piece reveals its sacred core: a stamped verse known as the Ye Dharma Hetu, which distills the Buddha’s teachings into four lines. Clay seals with this verse served as offerings too, but within a stupa these impressed words act as the relic that consecrates the clay form, transforming it into an offering worthy of the Buddha. 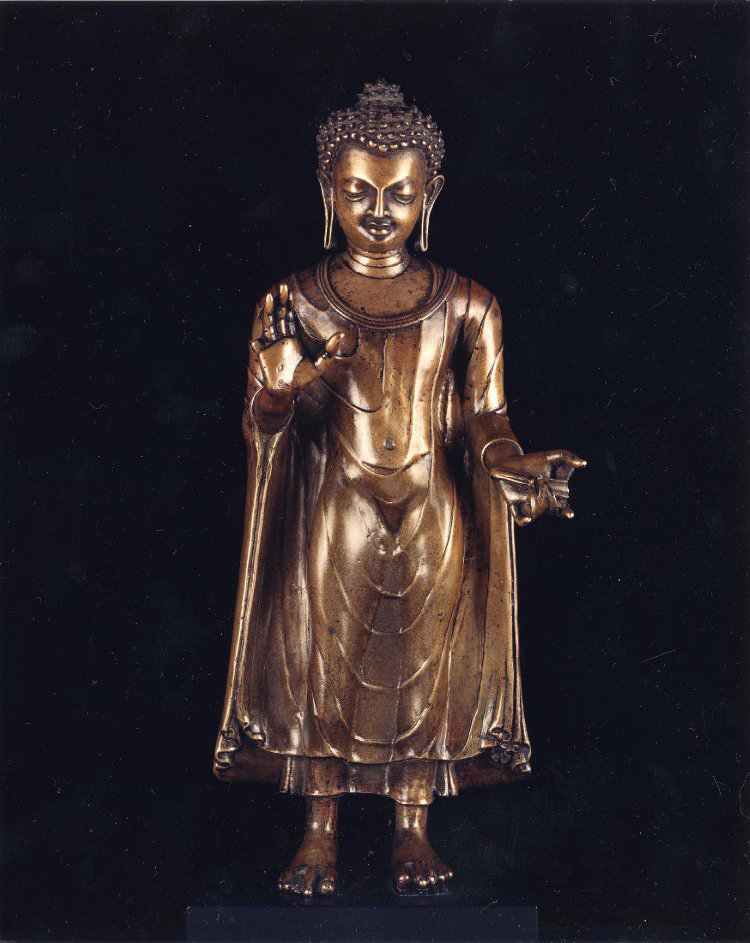 Two major monastic universities were located on the pilgrims’ trail within the cradle of Buddhism and not far from Bodh Gaya. Places where one might pick up the latest Buddhist texts and teachings, Nalanda and Vikramashila were common stops for monastic pilgrims, but Hyecho did not journey to either institution. Yet, manuscripts were not the only hot commodity—pilgrims often purchased portable bronze images from the local workshops that served these monasteries. Although this Buddha was likely cast in one such monastic workshop, it was actually found in Tibet, brought there by a returning Tibetan pilgrim or a visiting Indian teacher. As Indian missionaries and pilgrims from across Asia carried sculptures to the many corners of the Buddhist world, the artistic ideas and innovations of Indian artists circulated with them. The cascading, string-like folds of the robe and the ample, idealized body of this Buddha are hallmarks of the Gupta style, which had a long-lasting impact on Buddhist art. But remnants of blue pigment in the hair indicate that this sculpture was altered to suit local aesthetic taste and worship in Tibet. 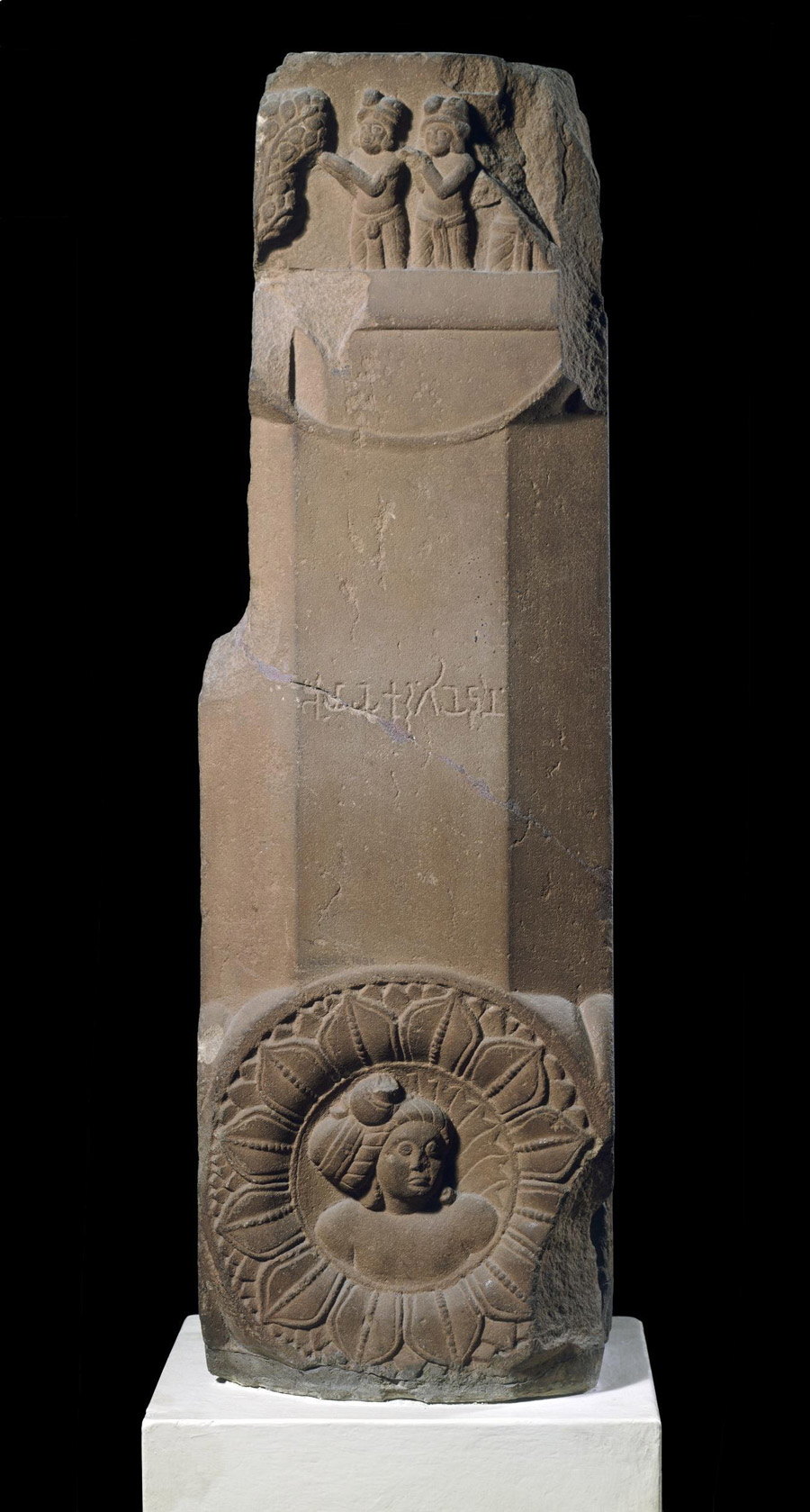 According to Xuanzang’s account, the temple compound at Bodh Gaya was filled with shrines and stupas commemorating the many actions of the Buddha preceding, during, and succeeding his enlightenment. The earliest archaeological evidence from the site, however, indicates that the first holy structure was a tree shrine dating to the first century CE. Like many early Buddhist sacred sites in India, an intricately carved stone railing created an enclosure and demarcated a path for circumambulation around the Bodhi Tree. This pillar once formed part of the original railing. Two of the pillar’s faces—the inner and outer sides of the railing—feature relief carvings. Here, an elaborately turbaned man is portrayed in the lower roundel, while three turbaned devotees worship the Bodhi Tree in the scene above. An inscription in Brahmi script identifies the noble lady Kurangi as this pillar’s donor, one of many Buddhists who contributed to the art and architecture of Bodh Gaya over two millennia.