From Tokhara I traveled west for one month and arrived in Persia. A long time ago, the king of this country ruled over the Arabs ... However, a revolution erupted, the king of Persia was killed and an Arab became king ... The land produces camels, sheep, mules, and horses, [and] produces very large donkeys, cotton cloth and precious gems. Their language is distinct and different from other countries. It is said that the people’s character is suited for commerce and they are continuously sailing from the west sea down to the south sea, as far as Simhala [Sri Lanka] where they obtain all sorts of treasures. As a result, that land is said to produce many treasures. They also obtain gold from Kunlunguo [Mekong Delta], sail to Chinese lands and on to Guangzhou where they buy plain and patterned silk fabrics, silk thread, and cotton. In their own land, they produce good fine cotton. The people here like to hunt, serve Heaven, and know nothing of the Buddhadharma.

Although Hyecho found no evidence of Buddhism in Persia, it is possible that the Buddha was known there, but by another name. Some version of the Buddha’s life story was probably translated into Persian, perhaps during the seventh century, about a century before Hyecho’s journey. The Persian version of the story does not survive, but it is the likely source of an Arabic book called Kitab Bilawhar wa Budasf (“The Book of Bilawhar and Budasf”), the first extant version of which was composed sometime between 750 and 900. It is not a Buddhist story but a Muslim story, clearly based on a version of the life of the Buddha that had made its way from India to Persia. It is the story of a prince named Budasf who grows up in a beautiful palace built by his father, the king. Eventually, the prince takes a number of chariot rides, where he encounters for the first time worldly suffering and a new religion centered on asceticism. The Arabic word budasf is a phonetic rendering of “bodhisattva,” the term used to refer to the Buddha in the years before his enlightenment, including his life as a prince.

Hyecho is the only Buddhist pilgrim of his era known to have traveled to Persia (modern Iran), a region where, as he observed, Buddhism was not practiced. It seems likely that he had attached himself to one of the many merchant caravans that traveled along the Silk Road from Central Asia. Perhaps he was curious to see what lay to the west; perhaps he was merely lost and confused. Certainly, his description of Persia shows a keen awareness of the commodities that moved along the well-traveled caravan routes.

His description of a thirty-day journey suggests that he passed through Khorasan, a vast and varied region that encompasses today’s northeastern Iran, southern Turkmenistan and northern Afghanistan. The fortified city of Nishapur, located in present-day Iran, was his probable destination. Located in a fertile plain at the base of the Binalud Mountains, Nishapur lay along important trade routes. The city was founded in the third century CE as a fortified trading outpost. Following the Arab conquest of the Sasanian Empire in 651, Nishapur fell under the control of Muslim Umayyad Sultanate and began a rapid period of growth. In the early eighth century, it was home to Zoroastrian, Christian, Jewish, and Muslim communities of farmers, herders, traders, and artisans. Throughout its history, Nishapur was a center of commerce and craft production, producing finely woven cotton and silk textiles, glazed and unglazed ceramics, elaborate metal and glass objects, and other fine crafts. These goods, in addition to animal and agricultural products and turquoise from nearby mines, are among the “many treasures” that Hyecho would have seen.

Nishapur continued to grow over succeeding centuries before being destroyed by Mongol invasion and earthquakes in the thirteenth century. While archaeological excavations have revealed much about the ancient city, only fragments of the eighth century city have been exposed, making it difficult to envision the lively city that Hyecho saw.

The Persian Sasanian Empire ruled a vast territory from 224 to 651 CE, when it was defeated by the Arab Caliphate. When Hyecho visited Persia seven decades after the establishment of Caliphate rule, he encountered a world still in transition. Local artisans continued to ply ancient crafts using traditional techniques, even as new artistic ideas, technologies, and styles were introduced. These goods capture a small taste of their artistic production during the late Sasanian-early Caliphate transition. 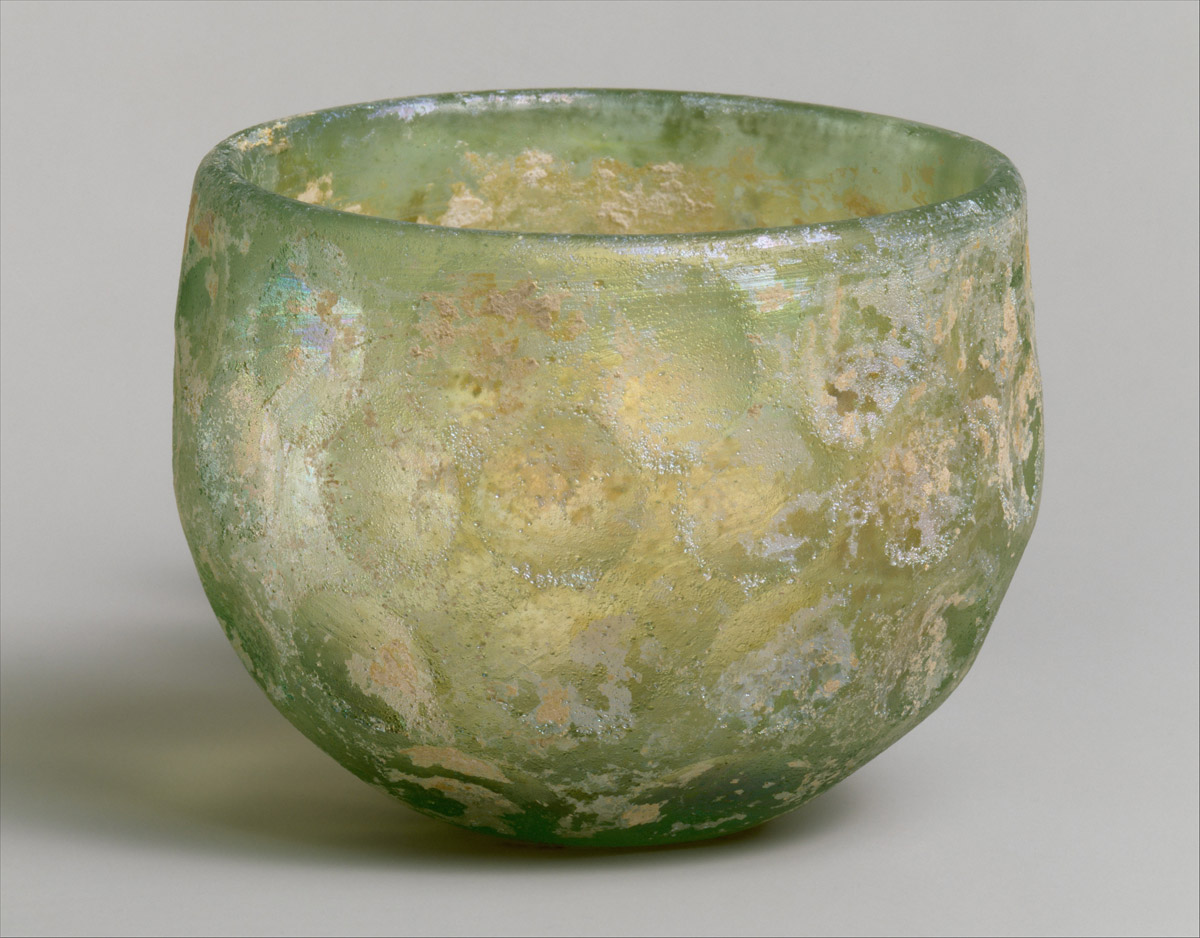 If Hyecho traveled to Persia with a merchant caravan, it is likely that glass vessels were among the objects they sought to acquire. From the third to seventh centuries CE, glass produced within the territories of the Sasanian Empire, which encompassed Northern Iran, Iraq and parts of Central Asia, was a valued commodity. It was traded widely along the Silk Route, with examples found as far east as Japan and Korea.

Sasanian glass-makers used a combination of manufacturing techniques. This small faceted bowl was first blown, either into a mold or free-blown. Next, the thick-walled vessel was placed on a rotating wheel so that the four rows of facets could be cut into the surface before the vessel was polished. During Hyecho’s time, glass was a luxury good, available only to the wealthy. While Hyecho would not have owned such an object, he may well have admired the elegant transparent glass wares on display in Persian markets and merchant stalls.

Following the conquest of the Sasanian Empire by Arab rulers, local mints continued to issue silver and gold coins with traditional imagery under the authority of the new Islamic rulers. This silver dirham was issued in 687 CE (68 AH) at the Bishapur Mint, by the Ummayud Governor Umar ibn Ubaidallah. Like earlier coins, it depicts a crowned royal figure on the front; a Zoroastrian fire altar flanked by two standing figures is shown on the rear. Arab-Sasanian dirham were made of nearly pure silver, though weight standards seem to have varied from place to place. As a monk, Hyecho likely had little access to coinage, though coins such as these were essential to the thriving trade that he witnessed in Persian markets.

Fragment of a woven silk textile 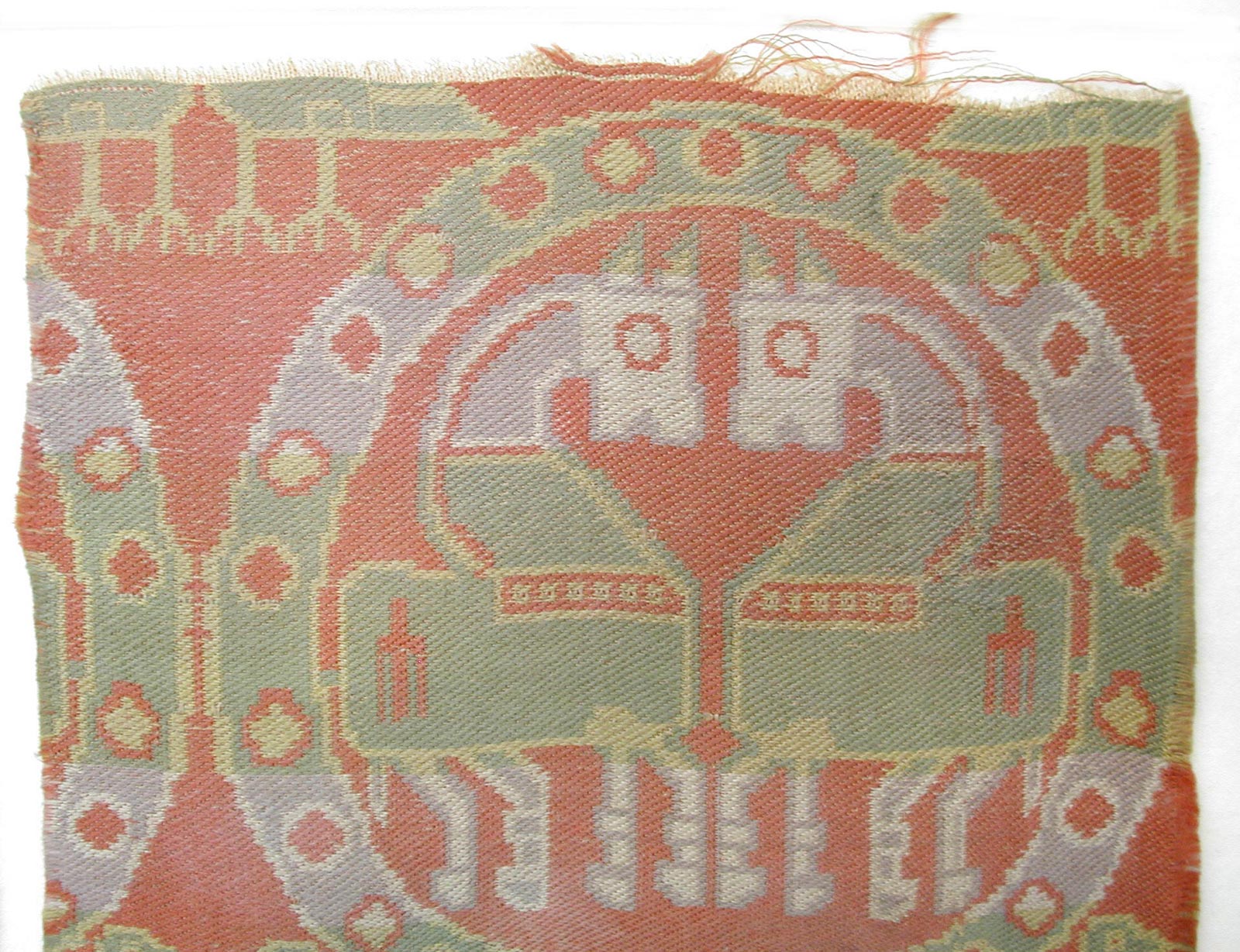 Chinese silk made its way to the textile workshops of Persia, where skilled weavers produced elaborate and renowned textiles. This small fragment in the collections of the Metropolitan Museum of Art illustrates the skill of Persian weavers. The repetitive design depicts two stylized robed horses facing each other, encircled by a roundel; the feet of paired birds can be seen above them. Few Persian textiles of Hyecho’s period have preserved, and most that have exist only in small fragments. Nonetheless, Chinese, Arabic, and Persian sources attest that these textiles were highly valued and traveled widely along the merchant routes that Hyecho traveled during his journey. Decorative motifs common to Persian textiles and figures wearing garments made from them appear in Buddhist artworks at sites across the Silk Road. 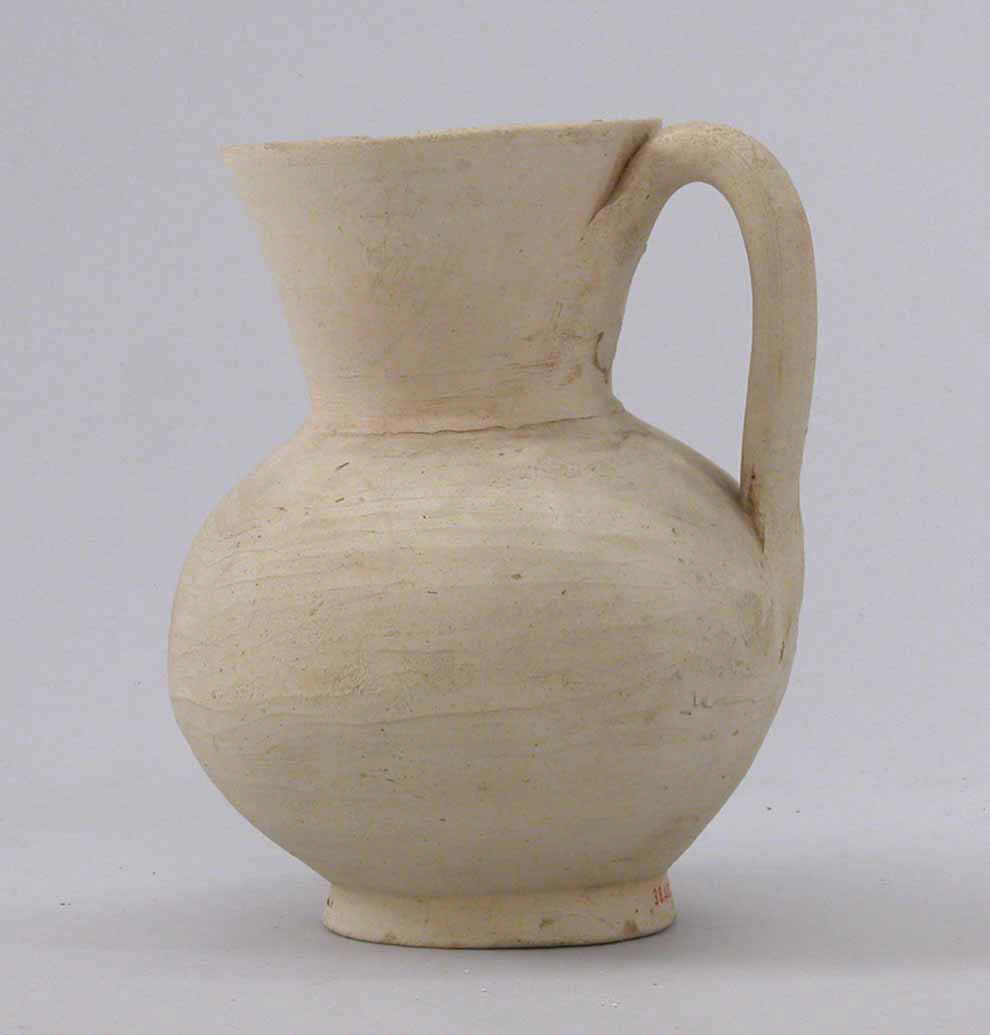 Although fragile, ceramic vessels also traveled widely during Hyecho’s era—as containers for food and water and as commodities in their own right. While elaborate decorated glazed vessels have received the greatest scholarly attention, the vast majority of ceramics made and used in Iran during Hyecho’s time were undecorated wheel-thrown vessels such as this small pitcher. The assymetries and rough finish of this white-slipped vessel suggest the potter produced it quickly for the local market at Nishapur, where it was recovered in archaeological excavations.