Moving on further east from Kashgar, I walked for one month, arriving at Kucha. Because this is the Anxi Grand Protectorate, a great many Chinese troops and horses are stationed here. There are many monks and monasteries here and they practice the Hinayana. They eat meat, onions, scallions and such. The Chinese monks practice the Mahayana.

The famous cave-temple complex of Dunhuang is important to Hyecho’s journey for a number of reasons. Most recently, it was in 1908 in the famous Library Cave that the young French scholar Paul Pelliot discovered the fragment of Hyecho’s travel journal, the source of almost everything we know about his pilgrimage. Hyecho himself stopped at Dunhuang on his way back to the Tang capital. For Hyecho, however, Dunhuang may have been important as a place for worshipping the bodhisattva that he worshipped more than any other, the Thousand Bowl Manjushri, the bodhisattva of wisdom with a thousand hands, each hand holding a bowl, and each bowl containing Shakyamuni Buddha. The bodhisattva is depicted in a beautiful, tenth-century mural at Dunhuang. Under the direction of his teachers, the Indian monks Vajrabodhi and Amoghavajra, Hyecho worked on the translation of the Sutra of the Thousand Bowl Manjushri at Mount Wutai, the sacred mountain said to be the bodhisattva’s abode. And it was there that our young pilgrim spent the remaining years of his life, eventually passing away on his bodhisattva’s holy mountain.

The Mogao Caves near Dunhuang in Gansu Province in the far west of present-day China occupy a pivotal position along the Silk Road and in Buddhist art history. From at least the fourth century, this oasis deep in the Gobi Desert grew as a garrison town and stopping point along the caravan routes connecting central China and points west. Thus, it served as one of the last outposts beyond which the influence of “China” was felt less and less. Yet, for Hyecho it was probably one of the first places where he found many of the linguistic and cultural forms he had earlier come to know in Silla and Tang China. In fact, with the wars in the Korean peninsula in the seventh century, Hyecho may even have met some of his émigré countrymen here. He could also have encountered members of many other ethnic groups that passed along the Silk Road, including Sogdians, Uighurs, Khotanese, Parthians, Tanguts, Mongolians, and South Asians. Although it is known for its Buddhist culture, the people who lived or visited Dunhuang also practiced Daoism, Manichaeism, Zoroastrianism, and Nestorian Christianity. After all of Hyecho’s travels, perhaps none of this would have surprised him at all!

Over the course of Dunhuang’s long history, devotees and visitors created over five hundred caves. Many of them were elaborately carved and painted, and would have primarily served as monastic residences and ritual spaces. Hyecho may not have had access to most of the private chapels, but he would have encountered monumental sculptures such as the Northern Great Buddha of 695 and the Southern Great Buddha of 721. He also likely recalled cave temples from South and Central Asia that he had visited on his travels. For reasons unknown, a manuscript of Hyecho’s travelogue was deposited in Cave 17 and rediscovered in 1908. It is now in the collection of the National Library in Paris.

Sites such as Kucha and Dunhuang have been interpreted as Central Asian cultural centers, but they were (at some times more than others) also in distant cultural orbits around the Tang capital of Chang’an. The relationship between these places and central China was not always clear, but we can say for certain that they are representative of the towns that punctuated the Silk Road, a massive multicultural thoroughfare extending from the Middle East to East Asia.

Audience listening to the Buddha preaching 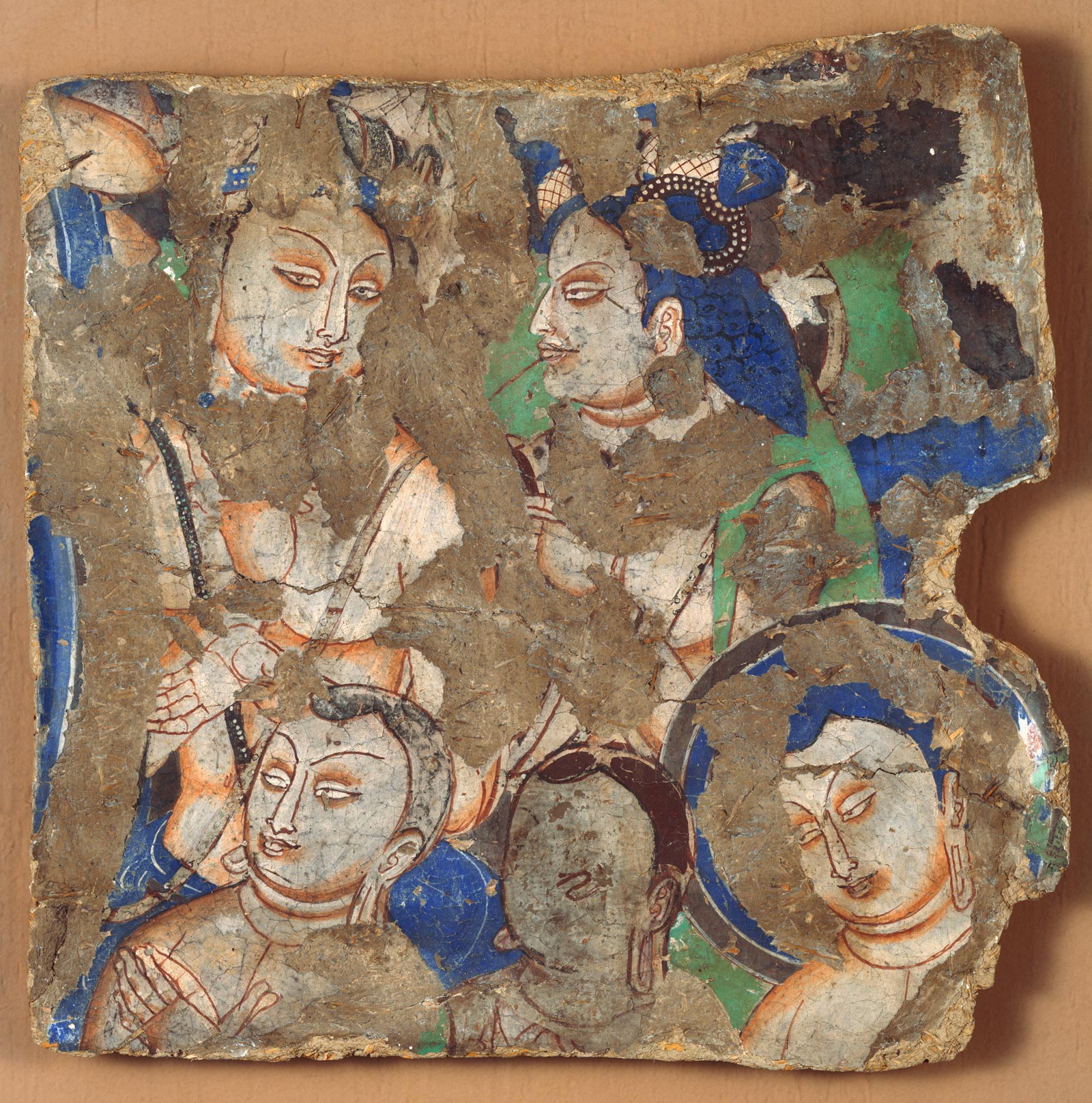 Although less famous than and not as numerous as the Mogao Caves near Dunhuang, the Kizil Caves are some of the earliest extant decorated Buddhist caves in present-day China. Around 1500 kilometers west of Dunhuang, the cave temples and dwellings at Kizil were constructed between the fourth and eighth centuries under the Tocharian Kingdom of Kucha, although Buddhism was likely established there earlier. The painted caves from the sixth and seventh centuries featured episodes from the life of the Buddha, as well as teaching scenes similar to the one this fragment once depicted. The murals, including this fragment, show little Chinese stylistic influence and indicate the diverse ethnic mélange through which Hyecho traveled along the Silk Road. In fact, one can find many visual elements tying the site to the arts of Gandhara and Sasanian Persia. In 727, Hyecho passed through Kucha on his way back to Tang China, but, unlike his predecessor Xuanzang, he makes no mention of the caves at Kizil, only commenting on the many monks and monasteries. 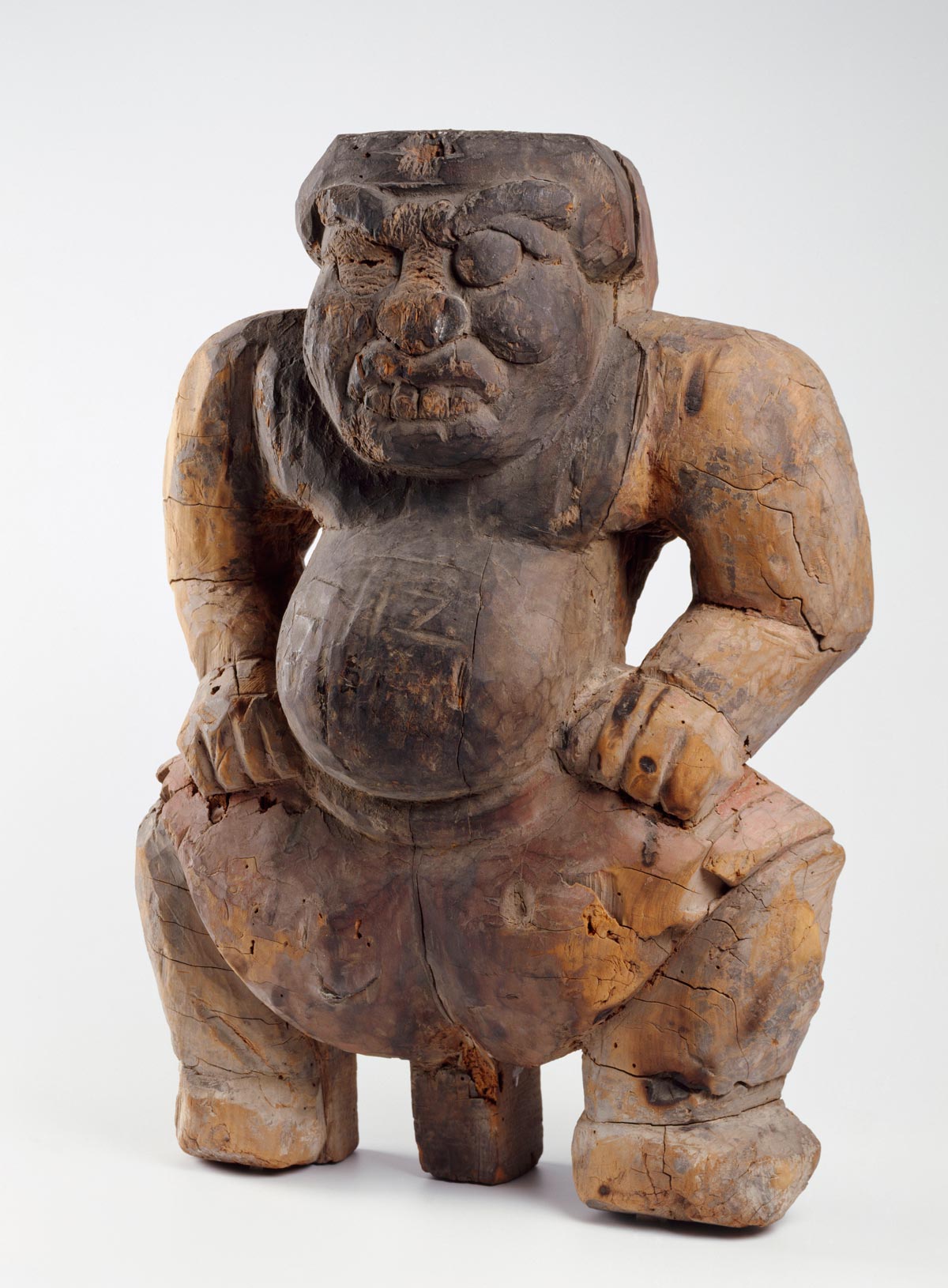 Dunhuang is a land betwixt and between and is only ambiguously “Chinese.” The people who lived there interacted with central China almost continuously, but the same could be said of many other cultures that helped to shape the site. This sculpture recalls little of the refined and iconographically constrained art of Tang China. Instead, it may represent the kind of rough and lively visual culture that Hyecho as an anonymous wandering monk would have encountered in the course of his travels. This fearsome figure probably supported an architectural element, where it may have been meant to scare away bad influences. 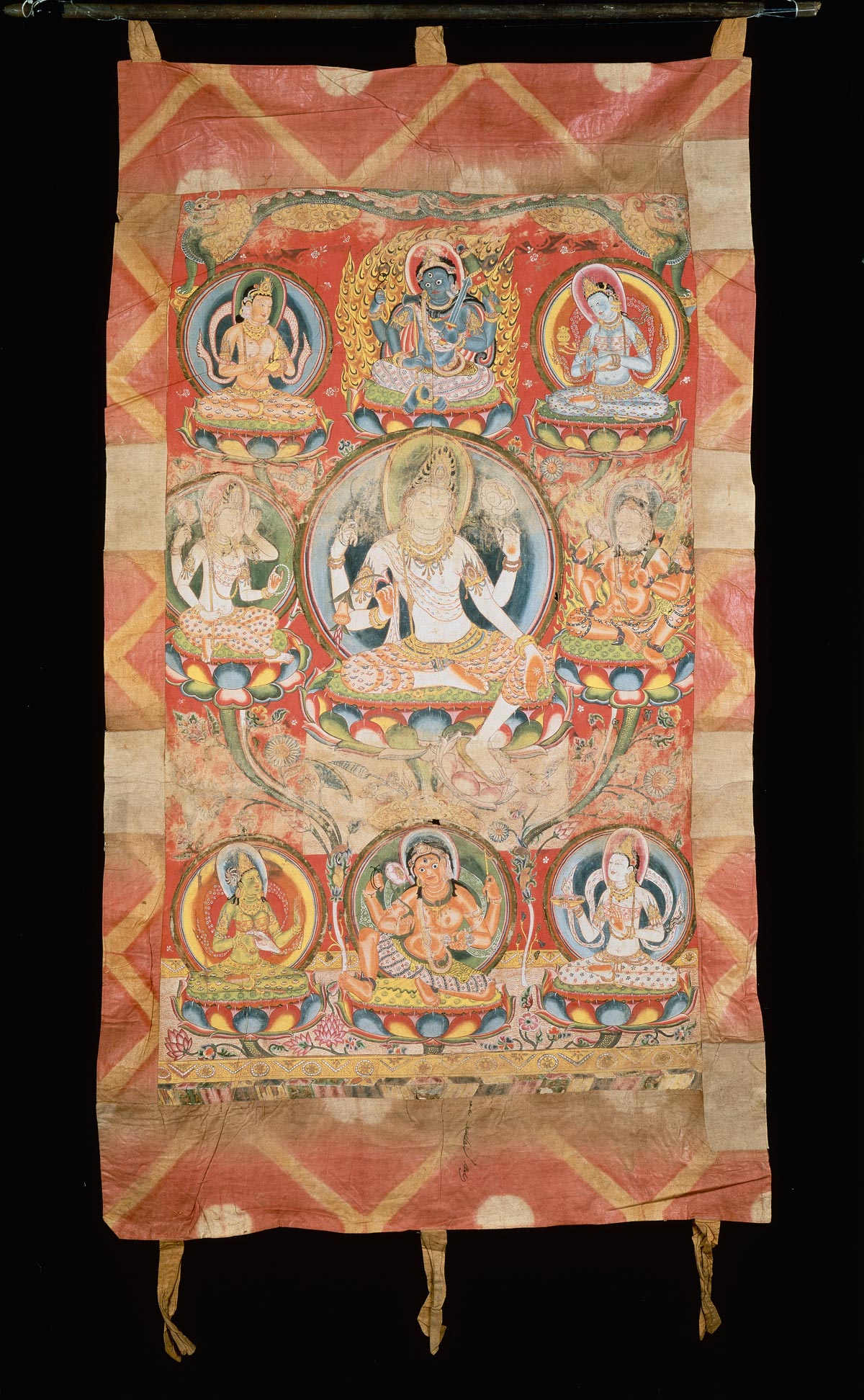 This is Amoghapasha (“he whose noose is unfailing”), a form of the bodhisattva Avalokitesvara. This iconography can be found throughout East and Southeast Asia, so Hyecho may have encountered this deity in Dunhuang or elsewhere. This remarkable painting indicates a distinctly tantric interpretation of Amoghapasha, with the eight figures arranged in a mandala-like composition around the central figure. Offering goddesses honoring Amoghapasha occupy the four corners, while four important tantric deities, including three with wrathful demeanors, sit in the intermediate directions. The fine rendering of the deities’ faces and distinctive ornaments might connect this to Tang artists, who were perhaps inspired by South Asian or Himalayan styles. Although Hyecho notes observing only Mahayana and Hinayana in the places he visited, it is likely that he saw practices and artworks like this belonging to Vajrayana or tantric Buddhism, but perhaps did not know what they were, until he settled on Mount Wutai in central China. 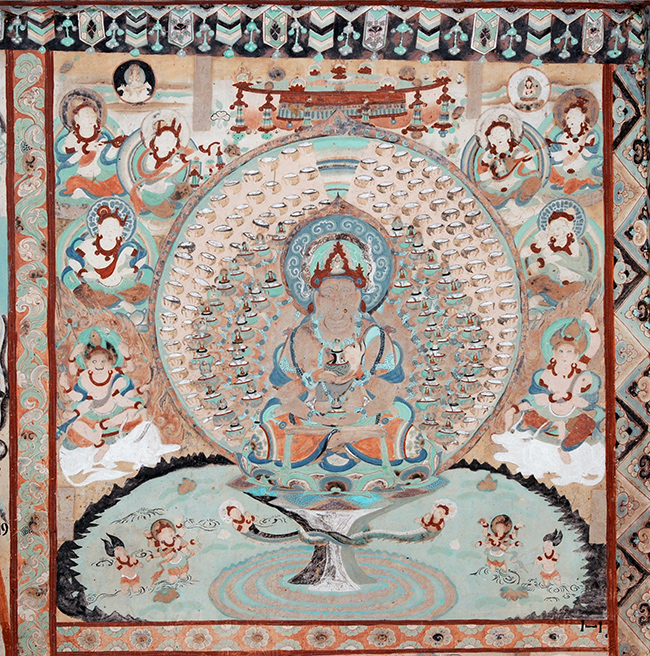 This mural was painted during the period of Tibetan rule of Dunhuang, many years after Hyecho passed through. However, it represents a deity with whom he clearly felt a special affinity: the Thousand-Armed Thousand-Bowl Manjushri. Hyecho spent nearly fifty years studying and translating texts associated with this bodhisattva, most notably the Sutra of the Thousand Bowl Manjushri. The preface to his translation states that an elderly Hyecho, likely almost eighty years old, spent his last years on Mt. Wutai, an important pilgrimage site believed to be an earthly abode of Manjushri. It is this preface that offers the only extant information about Hyecho’s life after his pilgrimage. This text also connects Hyecho with the Indian master of tantric Buddhism Vajrabodhi and locates them both within the burgeoning of Vajrayana in China.

The muted color scheme of this mural contrasts sharply with the Mandala of Amoghapasha and suggests the continuing use of Chinese and Central Asian artistic styles. The lake, attendants, and hourglass-shaped cosmic mountain on which the deity sits all suggest a kind of paradisiacal scene in which the viewer could encounter this divine vision.