One reason that Buddhism spread so widely across Asia is that monks traveled by sea, often on merchant ships. Sea travel was a perilous proposition during the period that Buddhism spread from India to China, and when Chinese and Korean monks like Hyecho traveled by boat from China to India. There are many stories of ships being attacked by sea monsters, with the monk onboard pacifying the beast with the power of his virtue and his meditation. In one famous story, the sea creatures are so taken with the monk that they invite him to their undersea world to teach them the dharma, miraculously returning him to the deck of his ship when they have received his teachings. In other stories, the bodhisattva of compassion, Avalokiteshvara, appears out of nowhere to rescue a drowning crew. Chanting the twenty-fifth chapter of the Lotus Sutra, where the powers of Avalokiteshvara are extolled, was considered a particularly effective means of avoiding death at sea. It was because of their ability to protect the ship that Buddhist monks and nuns were often welcomed passengers on sea voyages.

Although the first part of his journal is missing, it is likely that Hyecho’s journey to India began with a sea voyage that took him from southern China (present-day Guangzhou) along the coast of what is today Vietnam, Cambodia, and Thailand to the island of Sumatra, now part of Indonesia. By the time Hyecho began his pilgrimage, this was a well-traveled route for Buddhist monks, with many heeding the advice of the Chinese pilgrim Yijing to spend a year or more in Sumatra studying Sanskrit before undertaking the arduous journey to India. Indeed, in 671 CE Yijing described the city of Srivijaya on Sumatra as home to “more than a thousand Buddhist priests whose minds are bent on study and good works.” Archaeological excavations have identified the likely capital of the Srivijaya kingdom near Palembang in southern Sumatra.

Recent archaeological work in Indonesia, Malaysia and Thailand confirms the long history of trade and interaction and the spread of religious ideas and practitioners—both Buddhist and Hindu—along the maritime silk route that connected India and Sri Lanka to Southeast Asia and China. Spices, aromatic resins, silks, gold, precious stones and sacred images, as well as sailors, merchants, priests and pilgrims all traveled this route on large wooden ships, with evidence of their movement extending back to as early as mid to late first millennium BCE. The impatient Hyecho does not appear to have heeded Yijing’s advice to study before he boarded a ship to India, and we have no record of his stay in this vibrant cosmopolitan land.

Located along the maritime Silk Road that linked China to India, the artists and artisans of Indonesia and the Malay Peninsula of Southeast Asia drew on diverse artistic traditions. Ideas, images, and possibly even artisans from southern and northern India traveled with the many pilgrims and sailors who visited the seaports of Southeast Asia and helped shaped the region’s distinctive artistic traditions. 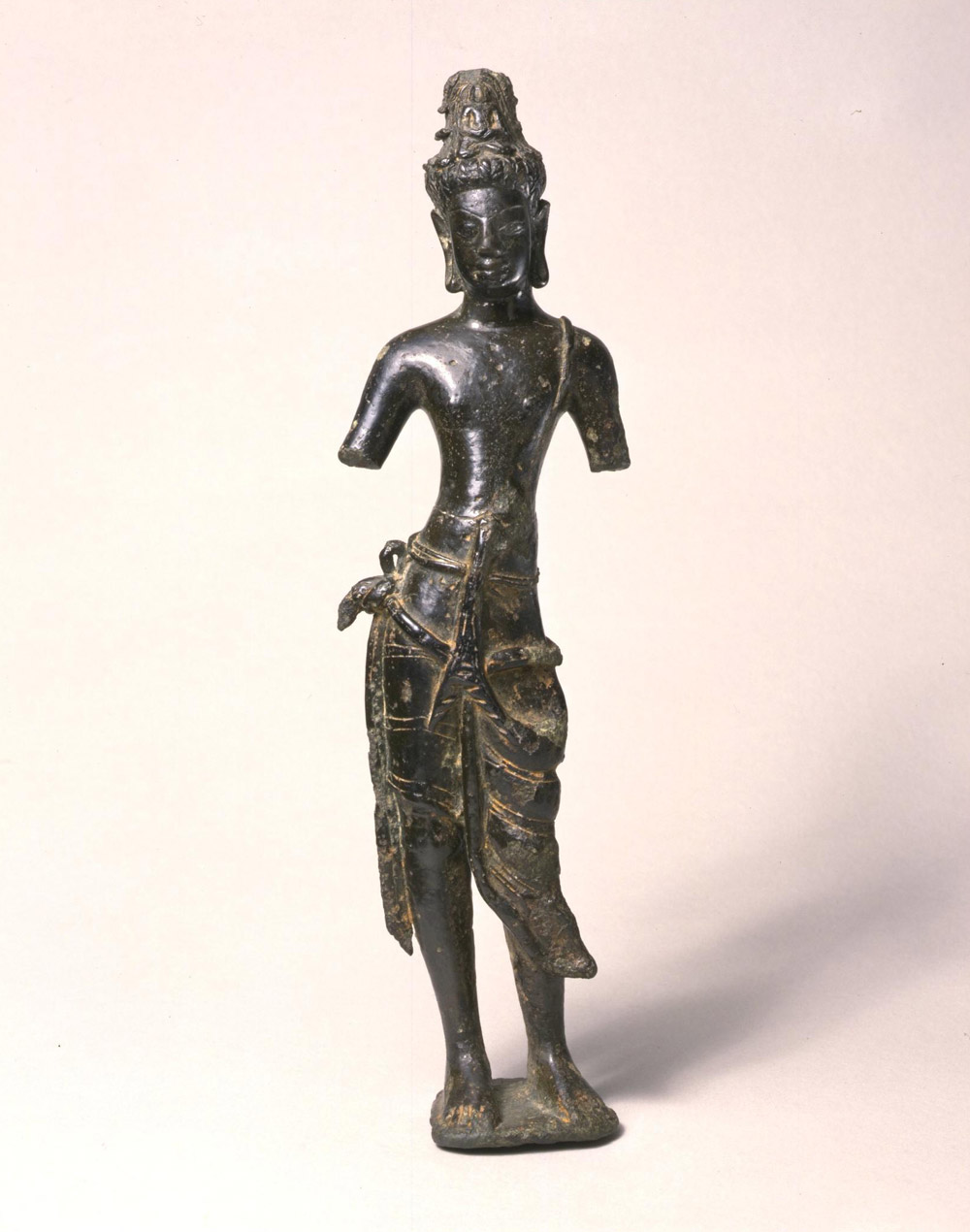 Both the Buddha Amitabha seated in the headdress of this graceful standing figure and the animal skin around its waist distinguish this image as Avalokiteshvara, the bodhisattva of infinite compassion. The worship of Avalokiteshvara was popular throughout East and Southeast Asia during and after Hyecho’s time. This image was originally part of a set of three sculptures, consisting of a central image of the Buddha flanked by the bodhisattvas Avalokiteshvara and Maitreya. Dating to the eighth century CE, the dark colored metal and other features indicate that this image was produced in peninsular Thailand, which was then under the rule of the Srivijaya kingdom. 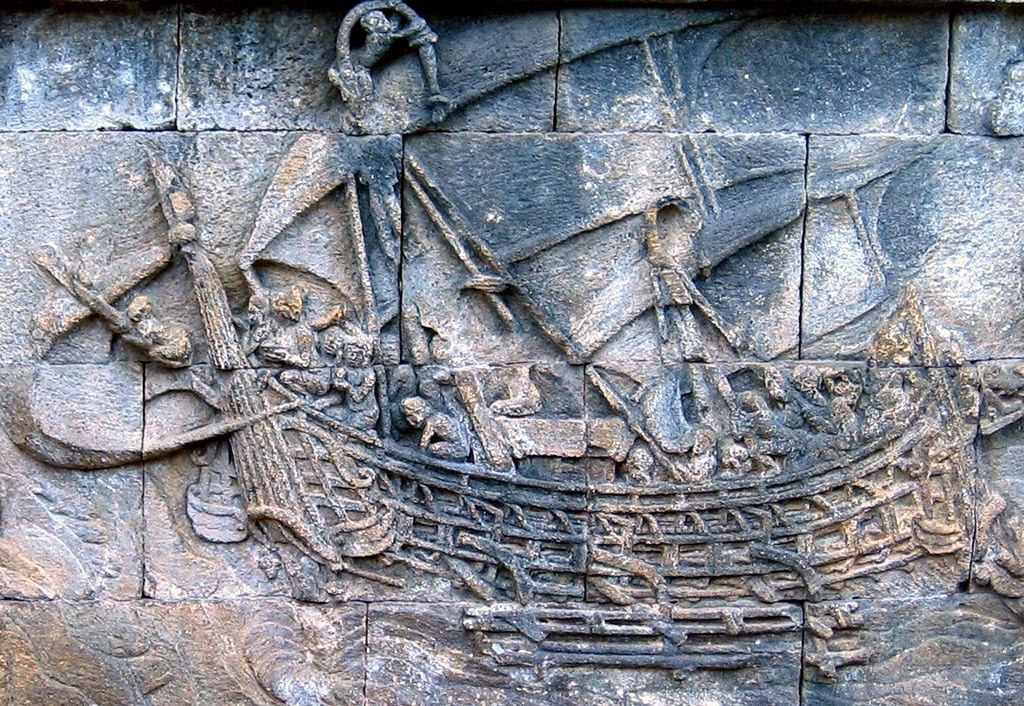 Images of wooden ships carved on the walls of the eighth century Buddhist temple of Borobudur in Central Java provide insights into the kinds of vessels Hyecho would have sailed on during his seaward journey across Southeast Asia and the Indian Ocean. In this striking depiction, sailors and passengers cling to the masts and sails of the double-outrigger wooden ship. Built as a massive stupa that forms a mandala when viewed from above, Borobudur is entered through one of four gates and ascended one level at a time, moving toward enlightenment. The levels are divided into the three realms of Buddhist cosmology, with the main structure of the building representing the Form Realm. These levels are decorated with episodes from the life and past lives of the Buddha, when he was a bodhisattva living in our world and place the Bodhisattva among realistically depicted many aspects of daily life in eighth-century Java, including carvings of ships. British sailor Philip Beale and colleagues drew on the boat carvings to design and construct a similar ship, which they successfully sailed from Indonesia to Ghana in a six-month expedition. 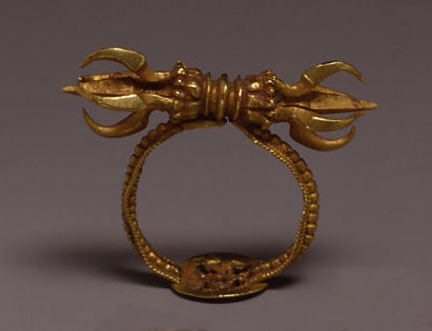 Rich gold sources in Sumatra and elsewhere in Southeast Asia attracted Chinese and Indian merchants to the region as early as the late first century BCE. During Hyecho’s time, pilgrims stopping in coastal cities would have rubbed shoulders with merchants from across Asia who traded in precious metals and ornaments and images crafted by the region’s renowned goldsmiths, as well as in silks, resins, spices, and other products.

The thunderbolt (vajra) bezel on this eighth to tenth century CE Central Javan gold ring indicates that it was made for a devotee of Vajrayana Buddhism. Its owner would have worn it as a sign of devotion and a symbol of the indestructibility of the enlightened qualities s/he sought to cultivate through religious practice. 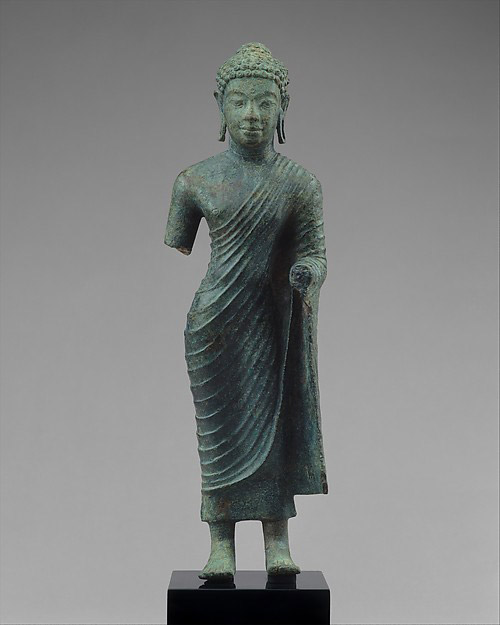 This small image from Kalimantan, Java is one of a group of contemporary Javanese images of the Buddha that draws on southern Indian artistic traditions, evident in the graceful pleated robe that falls from the figure’s left shoulder. It and similar pieces made by Javanese smiths was likely modeled on an Indian example brought to Java by a traveling monk, pointing to the spread of artistic ideas. The movement of people, images, beliefs, and practices across Asia meant that even as Hyecho visited unfamiliar places where he did not speak the language, he likely found much that was familiar.