From Central India to South India, I traveled south for over three months to get to the city where the king resides. ...

Their clothing, food, and customs are similar to those in Central India, with only their language differing slightly. The climate is also hotter than in Central India. The main products of this country are cotton cloth, elephants, water buffalo, and yellow cattle. There are a few sheep, but no camels, mules, or donkeys. There are rice paddies, but no millet or sorghum. As for silk fabrics and the like, such cannot be found in any of the five Indian kingdoms. The king, chiefs, and commoners hold the Three Jewels in the highest regard. There are many temples and monks, who practice both Mahayana and Hinayana.

On my journey to South India, I composed this five-character poem:

In addition to being the site of India’s most famous Buddhist caves, South India is also associated with Nagarjuna, the most famous of Buddhist philosophers, renowned for his various expositions of the doctrine of emptiness, especially his Verses on the Middle Way. However, he was also known as an advisor to the second-century South Indian king, Gautamiputra, composing two works that are said to be advice for him. Despite, or perhaps because, of his sophisticated philosophy, Nagarjuna figures in many legends, often appearing as an alchemist, not a philosopher. According to one story, he lived for six hundred years. Although he could not be killed, Nagarjuna allowed himself to be beheaded by a young prince, who, it was said, could not become king as long as Nagarjuna lived. The beheading could not be accomplished with a sword, but because in a previous life he had killed an insect on a blade of grass, he instructed the boy to use the plant as the weapon. After that, neither his body nor his head decomposed. His head was carried far away from his body, but is slowly rolling back, at which point it will rejoin his body and he will come back to life.

After visiting pilgrimage sites associated with the life of the Buddha, Hyecho’s path turned southward. His writings from this portion of his journey are, like much of his preserved text, perplexing. They do not tell us why he diverted from the more common pilgrimage route to head south. Nor do we know precisely where he went. Hyecho wrote that he journeyed for three months from Kanyakabuja (the city of Kanauj on the Ganges River) to a city where a king who ruled over a vast portion of peninsular India resided.

This king was likely Vijayaditya (reigned ca. 696-733 CE), ruler of the Chalukya state and member of a ruling lineage that claimed authority from the Hindu god Vishnu. Vijayaditya is particularly renowned for sponsoring the construction of temples dedicated to Shiva and Vishnu at Badami, Aihole, and Patadakal in modern Karnataka state. Chalukya rulers, nobles, and merchants also sponsored Jain and Buddhist monuments and institutions within their diverse territories.

Nasik, located on the banks of the Godavari River in modern Maharashtra was an important city during Vijayaditya’s reign. Based on estimates of travel time, this may well be the city that Hyecho visited during a time when the king was in residence. In brief notes, Hyecho recorded the presence of many temples and monks, both Mahayana and Hinayana.

Hyecho also described a large, abandoned monastery that had been cut from the mountain. Hundreds of rock monasteries and temples were carved into cliffs in western India from the late centuries BCE to early centuries CE. If Hyecho was indeed in Nasik, he may have been referring to the nearby Pandavleni (Pandu Lena) caves. However, unlike his description, this was not a single monastery but a cluster of twenty-four Buddhist monasteries and worship halls that had been carved into the face of a stone cliff between ca. 100 BCE and 300 CE. Sculptures were added up until around 600, when the site was abandoned.

Once again, Hyecho’s words both tantalize and confuse!

In his travels throughout South Asia, Hyecho would have encountered people of many different faiths, who spoke many different languages. Rulers and laity often patronized multiple religious traditions, donating land and resources to Hindu temples, and Buddhist and Jain monasteries. The objects shown here illustrate the religious diversity and the tremendous artistic creativity of southern India during the time of Hyecho’s travels. 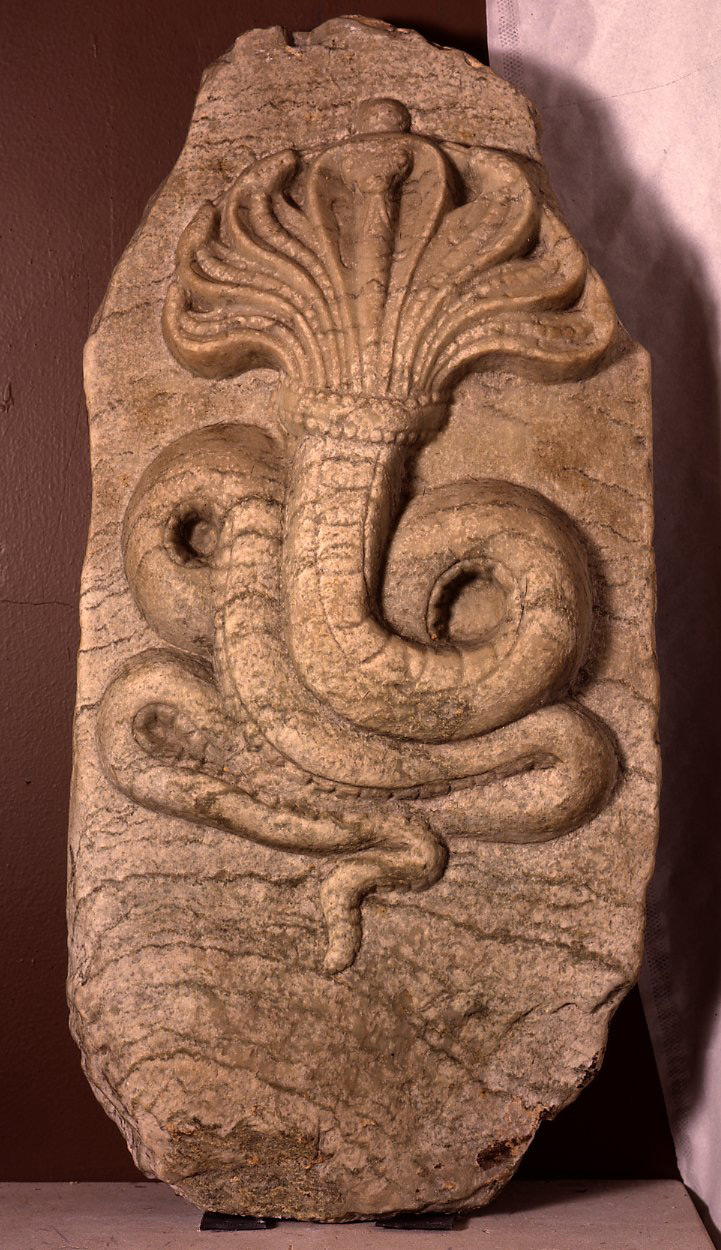 Sculpted depictions of nagas, or cobras, are common to Hindu, Jain, and Buddhist iconography. In all three traditions, nagas are powerful beings, with important sacred associations and protective capabilities. Among the most important nagas, the royal naga Mucalinda sheltered the newly-enlightened meditating Buddha from heavy rains by covering him with his seven heads. This seven-headed coiled naga image comes from the now destroyed site of Amaravati in Andhra Pradesh in southern India and dates from the eighth to ninth century. While Hyecho did not visit Amaravati, naga stones are common throughout southern India and Hyecho likely encountered similar sculptures on his travels. 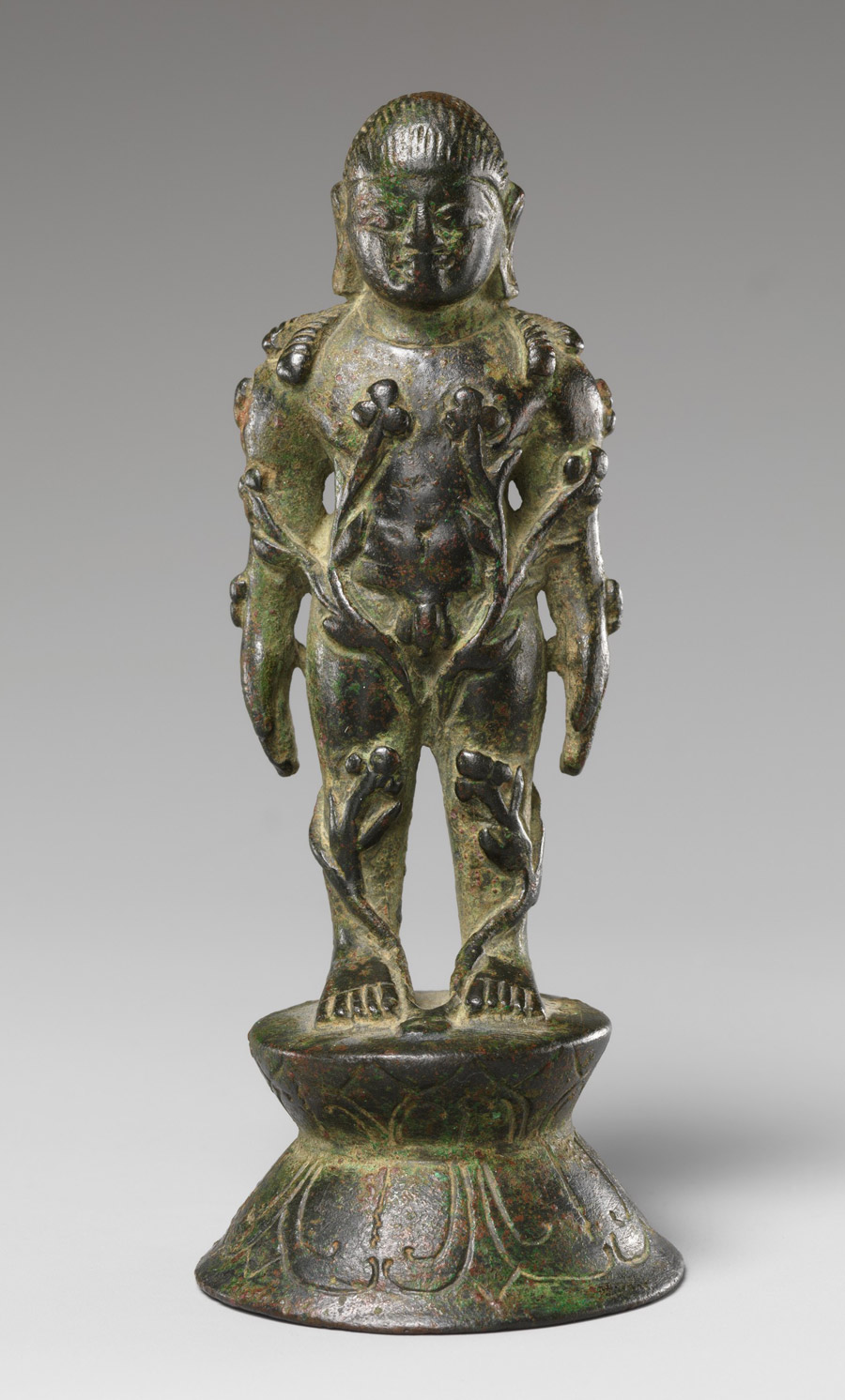 This small bronze image depicts the Jain siddha Bahubali. The son of the first Jain tirthankara (spiritual teacher), the King Rishabhanatha, Prince Bahubali fought his brother in a great battle over royal succession. After the battle, Bahubali regretted this. He adopted non-violence and abandoned all his possessions, including his clothes. Naked, he meditated in the forest and attained the status of a perfect being (siddha), as vines grew over his body and birds nested in his hair.

This Chalukyan image is an early sculptural representation of Bahubali, dating to the sixth to seventh century CE. Standing just over four inches tall, it is part of sculptural tradition that also includes the massive sixty foot tall stone Bahubali image at Shravana Begola in modern Karnataka. During a festival held every twelve years, the monumental image is bathed with sacred substances like milk, saffron paste, turmeric, and sandalwood powder. 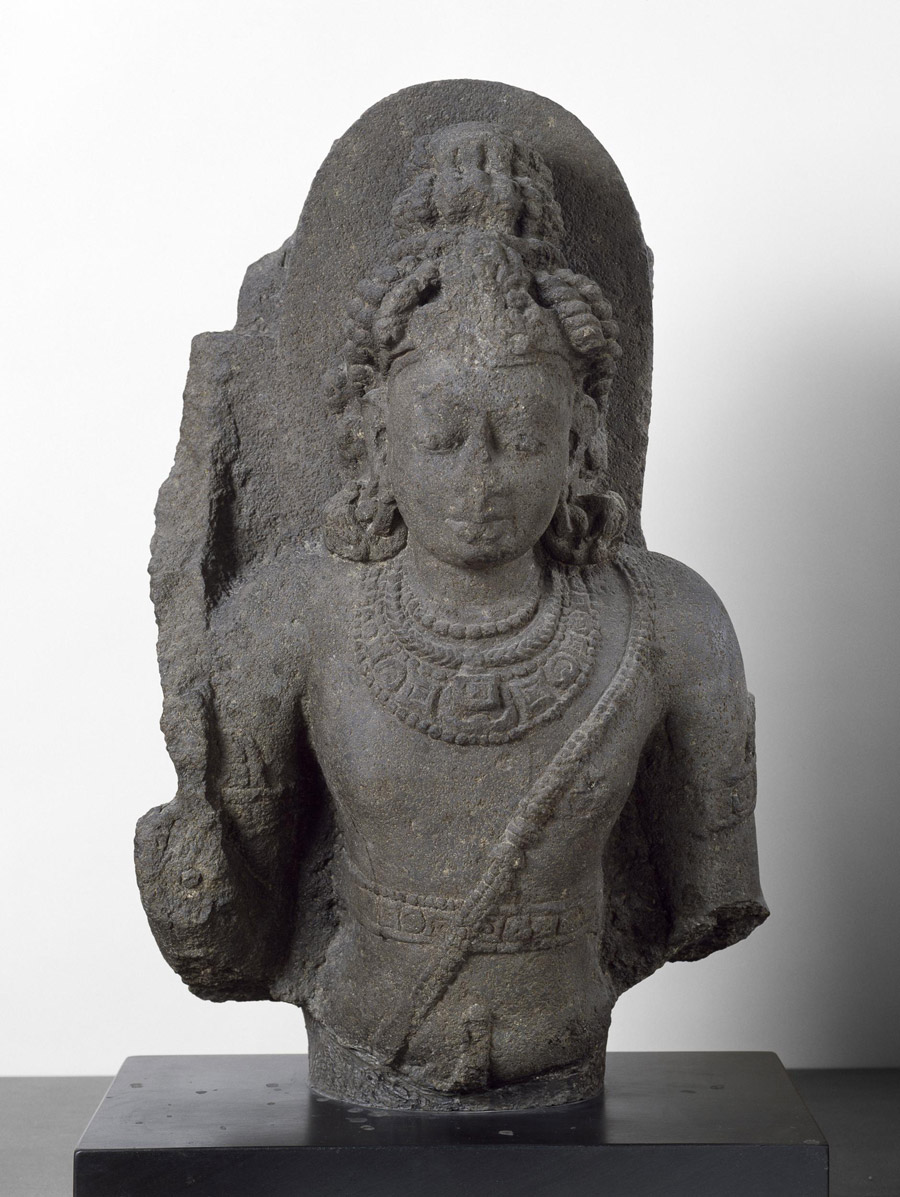 This standing seventh-century basalt image comes from India’s Western Deccan region. Heavily ornamented, the nude haloed figure wears a Brahmin’s sacred cord and had a raised right hand (now missing). Carved in the late Gupta or early medieval style that is best known from the rock-cut temples of Ellora and Ajanta, this free-standing image likely came from a small temple in the region and may depict the Hindu deity Shiva. Removed from its original setting and without the objects or weapons once held in his hands, the image lacks the clues and iconographic attributes that would aid in its definitive identification.