The Tang dynasty is considered the golden age of Buddhism in China, in part because so many monks traveled to India to study the dharma, bringing home new texts, teachings, and images. By far the most famous of these monks was Xuanzang (602-644). As a young monk, he left China in 627 for the perilous journey to India and did not return until 645. He brought back a cache of important Sanskrit texts, many of which he would translate himself, and wrote a detailed account of his travels. His “journey to the West” (that is, India) became the stuff of legend, inspiring the sixteenth-century picaresque novel of that name, the source of the still popular stories of the Monkey King. In the novel, when Xuanzang and his motley crew of companions are returning to China with the scriptures given to them by the Buddha, they learn that the scrolls are all blank. Incensed, they return and demand true scriptures. The Buddha replies that the true scriptures are indeed blank but if they want some with writing on them, he is happy to provide them.

Chang’an, located around present-day Xi’an in Shaanxi Province in central China, served as capital for the Western Han (206 BCE – 220 CE), Sui (581-618 CE), and the Tang (618-907 CE) dynasties. When Hyecho arrived there in the late 720s, Chang’an was probably the largest city on earth, with well more than one million inhabitants. Its walls enclosed 84 square kilometers, laid out on a grid with the imperial palace in the center to the north. According to the city plan, all of the roads were wider than 20 meters, with main avenues over 100 meters wide.

As a cosmopolitan center on the Silk Road, Chang’an hosted tens of thousands of foreign residents, including merchants, foreign envoys, and immigrants of Uighur, Tochari, Turkic, Sogdian Iranian, and Korean origin. Before the religious persecutions of 845, residents of Chang’an could choose from a wide variety of religions and schools of thought, including Confucianism, Daoism, Buddhism, Nestorian Christianity, Manichaeism, Zoroastrianism, Judaism, and Islam. The world—much of which Hyecho had viewed firsthand—was in Chang’an in the eighth century.

Given the richness and cultural gravity of Chang’an, one can imagine why Hyecho never returned to Silla, but it is striking that he chose to spend most of his life on Mount Wutai in Shanxi Province, more than 800 miles to the northeast of the capital. Doubtless part of the appeal of the site was its close connection to the bodhisattva Manjushri, whom Hyecho particularly revered, yet the choice may also provide some insight into Hyecho’s character. He seems to have eschewed the public attention lavished on other pilgrims, spending most of the rest of his life studying with South Asian teachers such as Vajrabodhi (671-741) and translating his favorite texts.

After all his travels, the rich urban culture of the Tang capital Chang’an must have seemed both familiar and strange to Hyecho. His long journey, surely first inspired by a wish to see the sites associated with the Buddha, had taken him full circle. Upon his return to China, however, the cosmopolitanism of the Tang empire likely reminded him of the many people and places he had encountered along the way. The lofty reclusion of Mount Wutai likely afforded a respite from this vast and complex world. 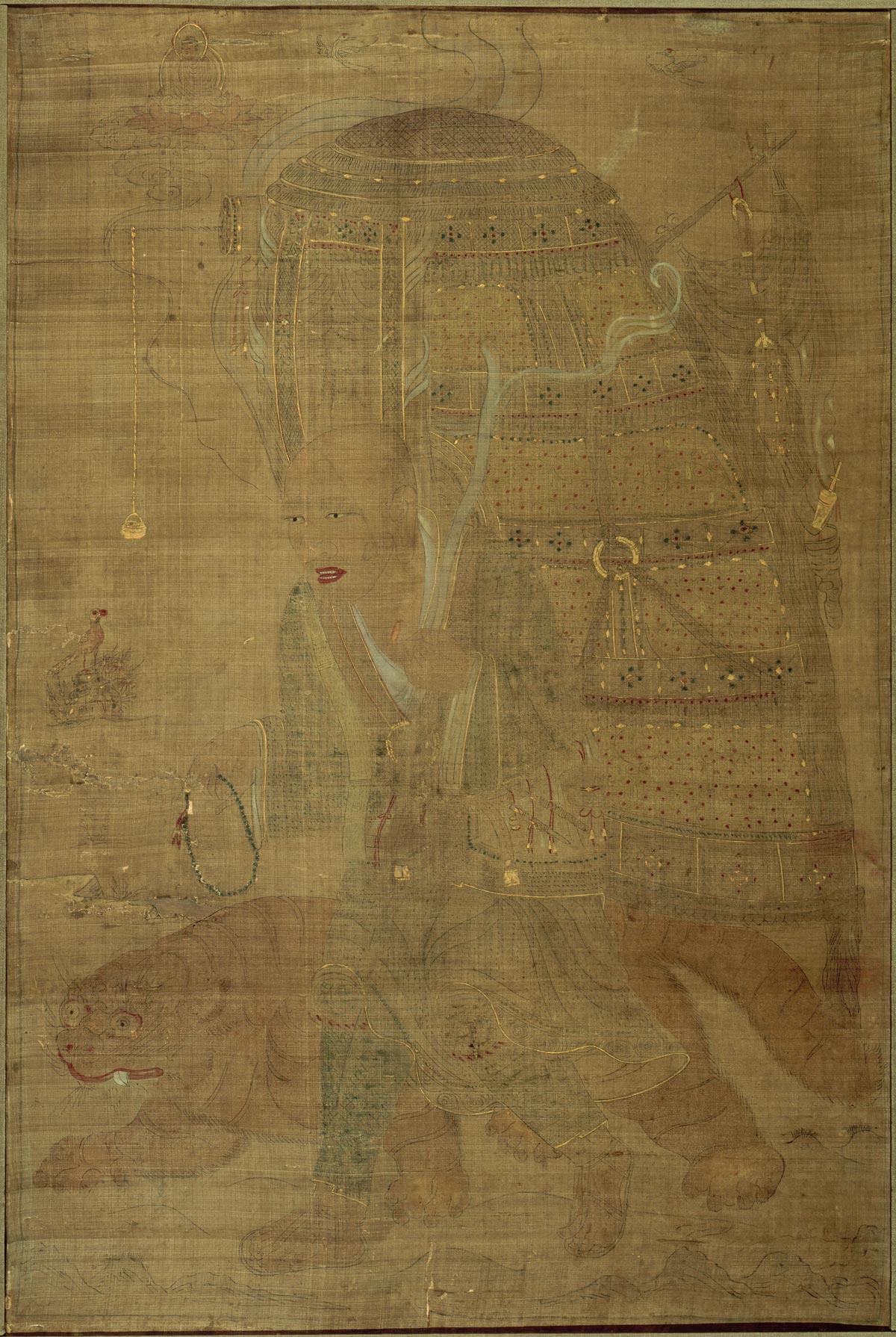 This monk, burdened with an enormous backpack full of sutra scrolls, dons the traditional clothes and accoutrement of an Buddhist pilgrim--something like Hyecho would have worn. His tiger and buddha companions, however, indicate that this monk is no ordinary man. He is, in fact, Dharmata (also Dharamatala; Ch. Damoduoluo, also Fazeng Jushi or Gashayabadalama Zhunzhe), who came to be identified as an attendant of the sixteen arhats, a group of the Buddha’s disciples whose extreme longevity allows them to preserve his teachings until the arrival of Maitreya, the buddha of the next age. In China, Dharmatala was also included as one of a group of eighteen arhats. In this early depiction of the figure, he may be a stand-in for the Central Asian monks who first introduced Buddhism to China, yet he also hints at how Buddhist travelers such as Hyecho were imagined. 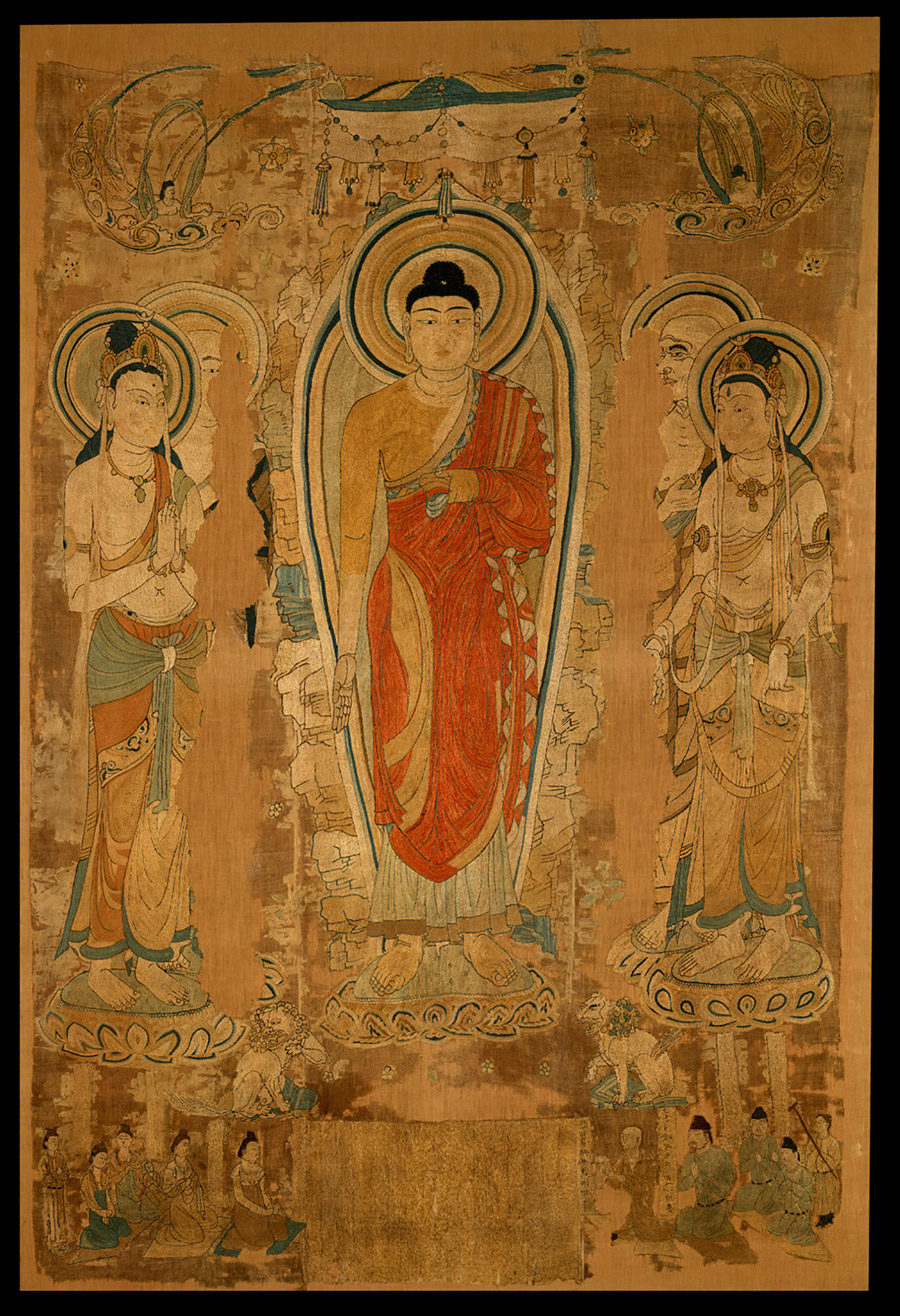 This remarkable object was actually found in the “Cave of a Thousand Buddhas” (Mogao Cave 17) at Dunhuang, but it is included here as a representative of the diversity of Buddhist art in Tang China. It was collected by Hungarian-born British archaeologist Aurel Stein (1862-1943) during his second expedition to Asia from 1906 to 1908; he donated this work to the British Museum in 1917. Despite the damage this rare silk embroidery has suffered, it is nonetheless in remarkable condition, with the central standing Buddha particularly well-preserved. A monk and several lay people in the bottom register—probably patrons and donors—appear in contemporary Tang-style garb, yet they seem to be in the same space as the Buddha and attendants. In this way, they have inserted themselves in the semi-mythical time and place of Vulture Peak in India, where Shakyamuni is said to have delivered some of his most important sermons.

Plaque of a Sogdian dancer, from pagoda of Xiudingsi temple on Mount Qingliang 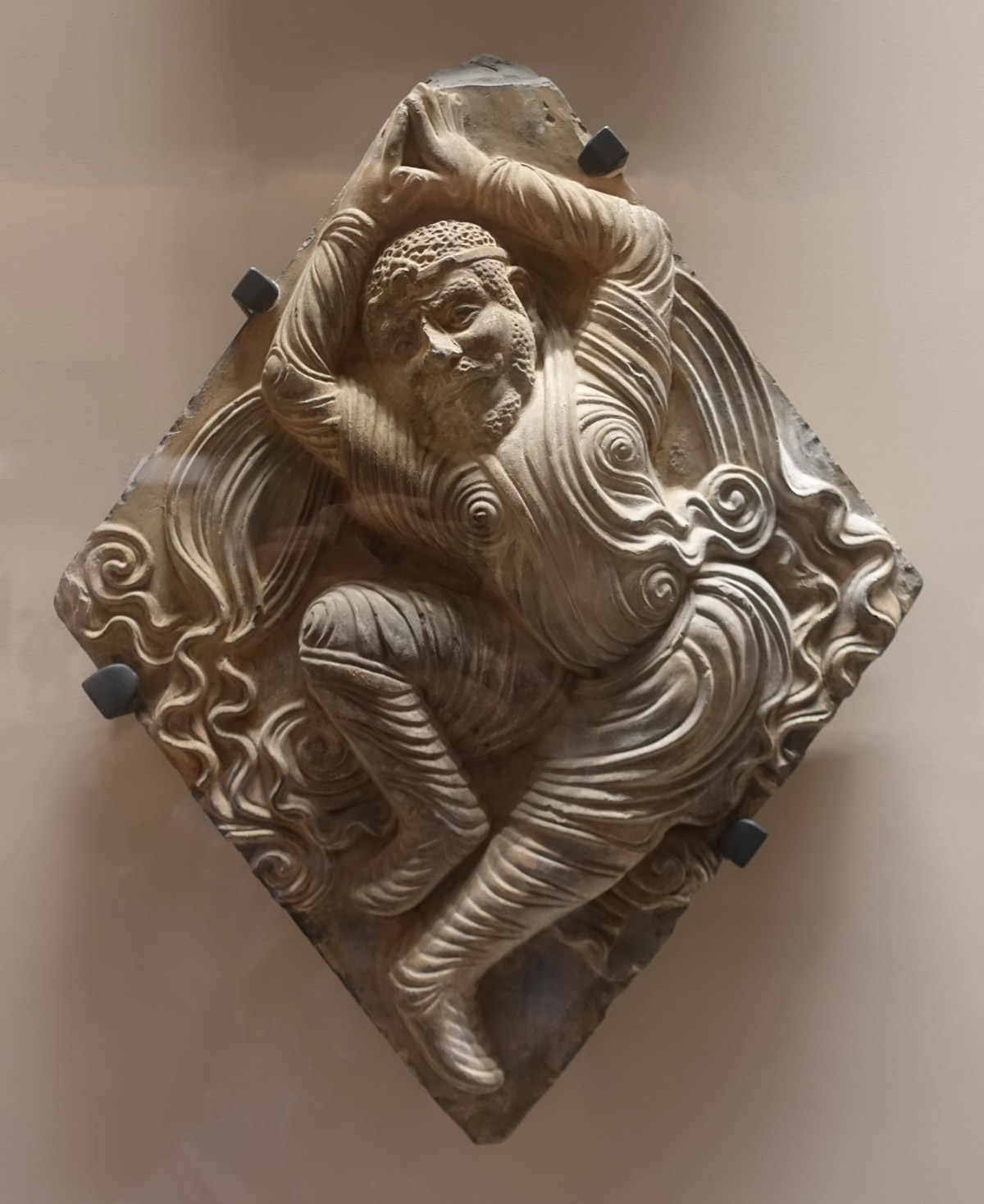 Xiudingsi Temple on Mount Qingliang was located roughly halfway between Chang’an and Mount Wutai, where Hyecho spent much of his later days. Although it was more than 700 kilometers from the Tang capital, materials found at the site of temple evince the cultural diversity that was typical of Tang cosmopolitan art. This is one of over three thousand molded tiles that decorated the square pagoda (dating to before 870), the only surviving structure from the original temple. This tile likely depicts someone dancing in the huteng leaping style of Sogdiana, an area in present-day Uzbekistan and western Tajikistan populated by ethnic Iranians. Why this particular motif was attached to a Buddhist pagoda is unclear, but it suggests that Hyecho’s multicultural journey did not end after he returned to China. 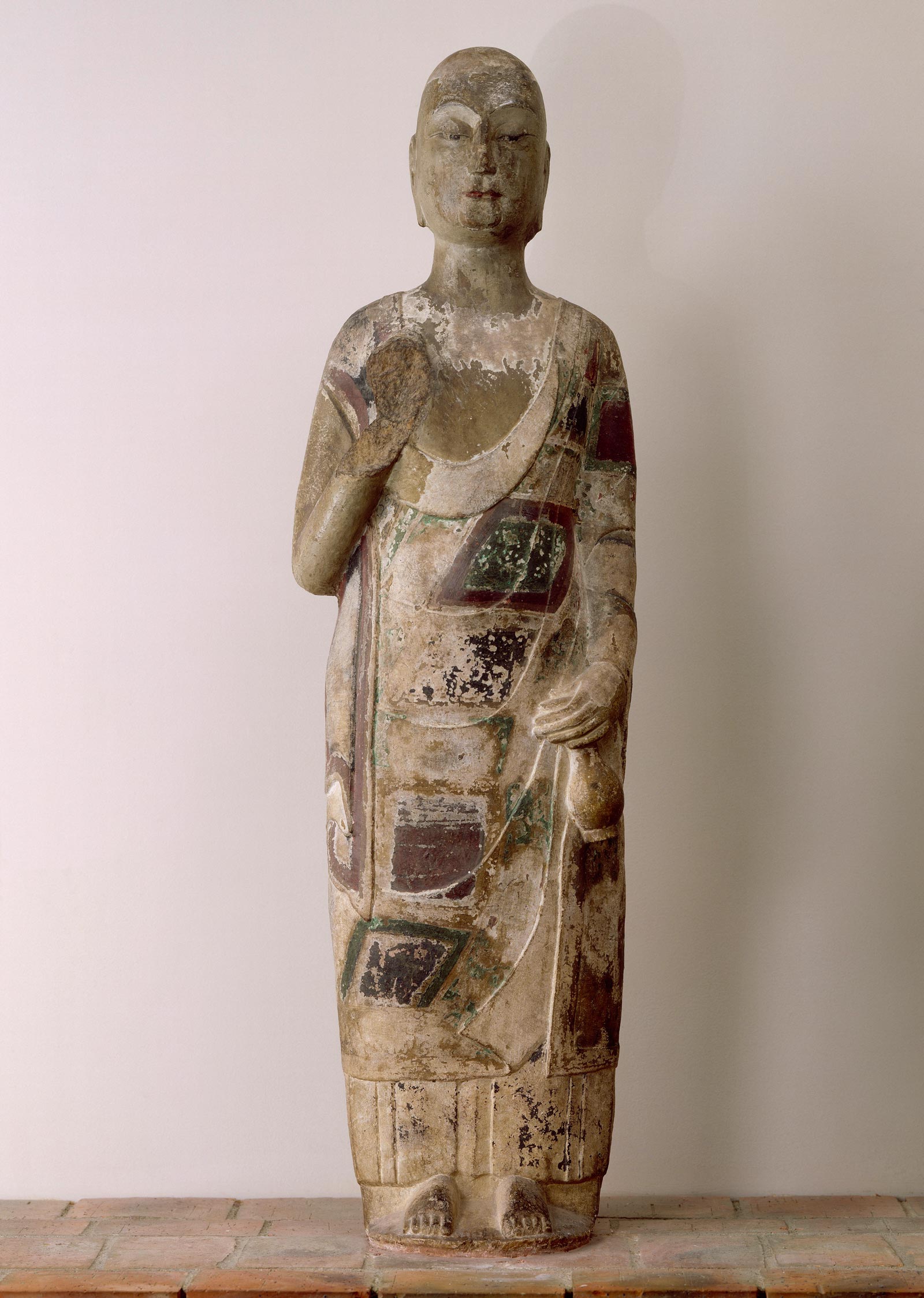 The history of Buddhism is often told from the perspective of famous monks and eminent thinkers. Hyecho was not one of them. In fact, his existence and his great journey are known only from a fragmentary copy of a text ascribed to him and a few textual references in the extant Buddhist canon. While art historians have tentatively identified this sculpture as Ananda, one of Shakyamuni’s most devoted disciples, it could just as well be a depiction of a nameless monk. Although we know much more about famed Buddhist founders and philosophers, visual, textual, and ritual traditions were formed just as much by anonymous clerics and lay people. These are the unnamed masses who constituted the vast network of Buddhists that allowed Hyecho to traverse much of Asia in only three years.