On the top [of the pillar is a sculpture of] a lion. The pillar is so big that five men could join their arms around it. The patterns are quite delicate...the pillar was made at the same time that the stupa was constructed. The temple’s name is Dharmachakra... At this temple, there is a gilt-bronze statue and 500… statues. These images were made by a former king of Magadha named Shiladitya. A gilt-bronze [dharma wheel] was also constructed here, and it is almost thirty paces in diameter. The city is located overlooking the northern bank of the Ganges. Here are four great sacred stupas, the Deer Park, Kushinagara, Rajagriha, and Mahabodhi all located with the territory of the Magadha king. Both Mahayana and Hinayana are practiced here.

The Buddha made his way on foot from Bodh Gaya to Sarnath. Along the way, he met a yogin who commented on his serene countenance. When the Buddha explained that he was enlightened, the man shrugged and continued on his way. When the Buddha finally arrived at a deer park in Sarnath, his five former friends saw him coming. Still angry that he had broken their fast to accept a meal, they decided to ignore him for turning to a life of luxury. However, when he approached, they were overwhelmed by his charisma, spontaneously rising to greet him and offering him a seat. After explaining that he had achieved enlightenment, the Buddha gave what is often referred to as his first sermon. In the Buddhist tradition, the event is called “turning the wheel of the dharma” because during this first teaching the Buddha set forth two of the most famous Buddhist doctrines. First is the middle way between the extremes of self-indulgence and self-mortification. And second is the so-called “four noble truths:” that life is qualified by suffering, that suffering is caused by craving, that there is a state beyond suffering, and that there is a path to that state.

Sarnath is also known as Rishipatana, “the place where sages descend.” It is the site of the Mrigadava, the Deer Park where the Buddha Shakyamuni, sage of the Shakya clan, gave his first sermon. Nearby, the ancient holy city of Varanasi sits of the banks of the Ganges. During the travels of Hyecho and his pilgrim predecessors, this so-called “city of light” was much like it is today, and likely similar to when the Buddha wandered nearby: an eternally sacred place for Hindus, Buddhists, and Jains, filled with chaotic crowds, funeral pyres, and winding warrens connecting shrines, residences, pilgrim retreats, and steps to the Ganges. For Hyecho, the Deer Park at Sarnath must have been a much-welcomed refuge from the overwhelming hustle and bustle of Varanasi. As he remarks in his journal, temples, stupas, and sculptures covered the grounds of the park, reflecting a long history of pilgrimage and patronage, going back at least to the legendary king Ashoka. In the third century BCE, he built a massive stupa and the lion-capital column seen by Hyecho, which was inscribed with an edict forbidding activities that might cause divisions in the monastic community.

Like Varanasi, Sarnath is a timeless place. It is considered sacred not only because of the many acts of the Buddha performed there and the succeeding centuries of pilgrimage and worship, but also by eons of deeds enacted during the past lives of the Buddha and the lives of past buddhas. Seventh-century Chinese pilgrim Xuanzang describes the events that occurred at Sarnath, their sites marked by stupas. In one story, when the Buddha was a deer-king, he asked the local ruler to kill him rather than a pregnant doe. The king was so astounded by the act of generosity that he designated the area as a deer park where the animals could wander freely and safely.

Sarnath and neighboring Varanasi are important sites where religious and artistic ideas and communities have converged, commingled, and coexisted over many centuries. The Gupta period, from the fourth to the sixth century, saw a great efflorescence of artistic production across northern India. Sarnath itself became a center of art-making. While this era is known as a golden age for Buddhist art, workshops served Jain and Hindu patrons as well, producing buddhas, tirthankaras, and Shivas in similar styles. As Hyecho traversed the sacred sites of northern India, he likely saw many images like this—an artistic world impacted by the Gupta style. 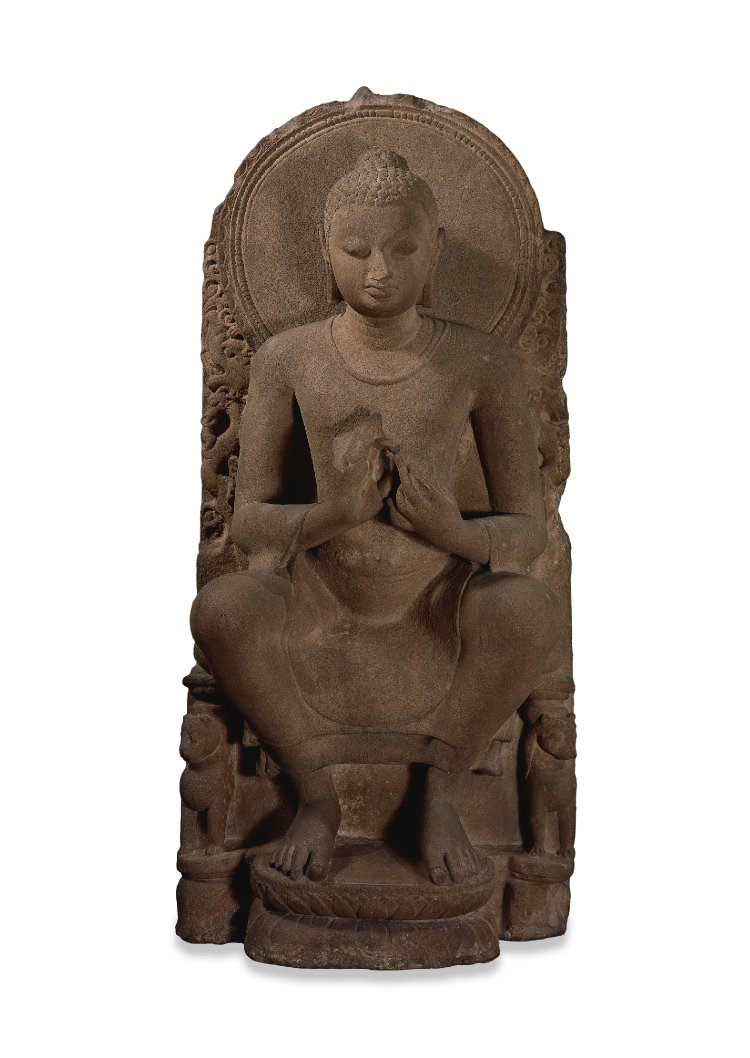 The hand gesture, or mudra, of a Buddha image can represent a general attitude or quality of the figure, such as generosity or meditation. But sometimes the mudra refers to a specific event in his life. This sculpture, discovered at Sarnath, portrays the Buddha in a gesture known as the “wheel of the dharma (dharmachakra) mudra,” which alluded to his first teaching at that site, when he set the wheel of the dharma into motion. His throne, supported by two lions, adds to the symbolism of the sculpture. Considered “a lion among men,” the Buddha naturally delivers his teachings—a “lion’s roar” that silences all competitors—from a lion’s throne. At Sarnath, the legendary, third-century-BCE Buddhist king Ashoka erected a pillar with a lion capital, which became a national emblem of India in the twentieth century.

During the Gupta period (fourth through sixth centuries), the wealth of Mathura, located at the nexus of important merchant routes, made it a center for Buddhist patronage, art production, and stylistic innovation. Sarnath became a major center of art-making during this period. While its artisans looked to sculptural models that originated in the religious and economic center of Mathura, they developed a style all their own—a style that came to be known as the “Sarnath School.”

This standing Buddha bears the attributes of Gupta style, which itself incorporated elements from the earlier traditions of Gandharan and Kushan sculpture. The image has both shoulders covered and gives particular attention to the ample quality of the Buddha’s body, the proportions of which are elongated and emphasized by the delicately draped robes that cling closely to his form. Typical of the Sarnath School, the robes lack the string-like drapery of Mathura images, instead portraying the outer and lower garments with a diaphanous simplicity. 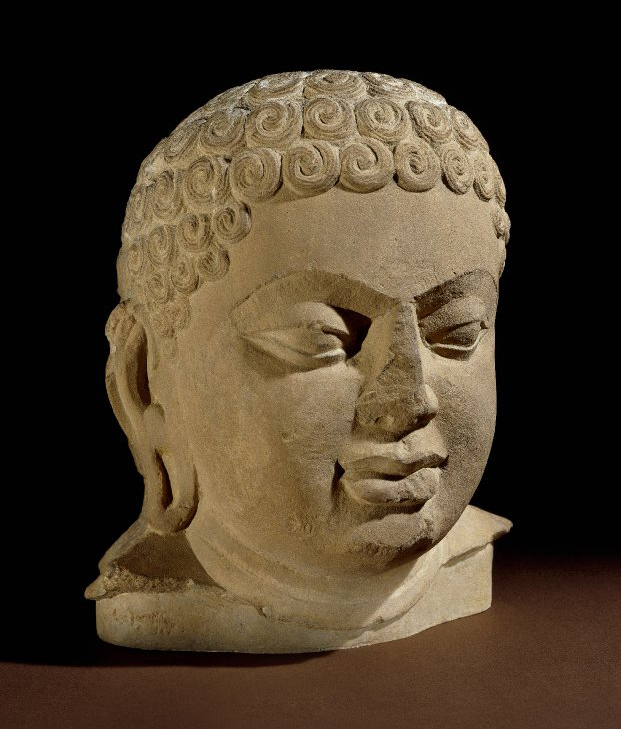 The Gangetic plains of India are not only home to Buddhist sacred sites, but to Jain holy places as well. Mahavira, who might be depicted in this sculptural fragment, is the twenty-fourth and most recent Jain tirthankara, a spiritual teacher who discovers the way out of the interminable cycle of rebirth. A slightly older contemporary of the Buddha, Mahavira lived and taught in the same areas of mid-first millennium BCE emergent cities along the Ganges and Yamuna Rivers. Sites associated with his life and those of the preceding tirthankaras are important places of pilgrimage for Jains. Sarnath is the birthplace of Shreyansnath, the eleventh tirthankara, and the location of four other auspicious events in his life.

Because Jain and Buddhist sculptures were made in the same workshops, and both buddhas and tirthankaras are portrayed with similar ascetic attributes, it is often difficult to tell these figures apart. Although this image possesses the snail-shell curls, heavy-lidded eyes, pensive gaze, and elongated earlobes of a buddha, it does not have the requisite crown protrusion (ushnisha), thus identifying it as a Jain figure. 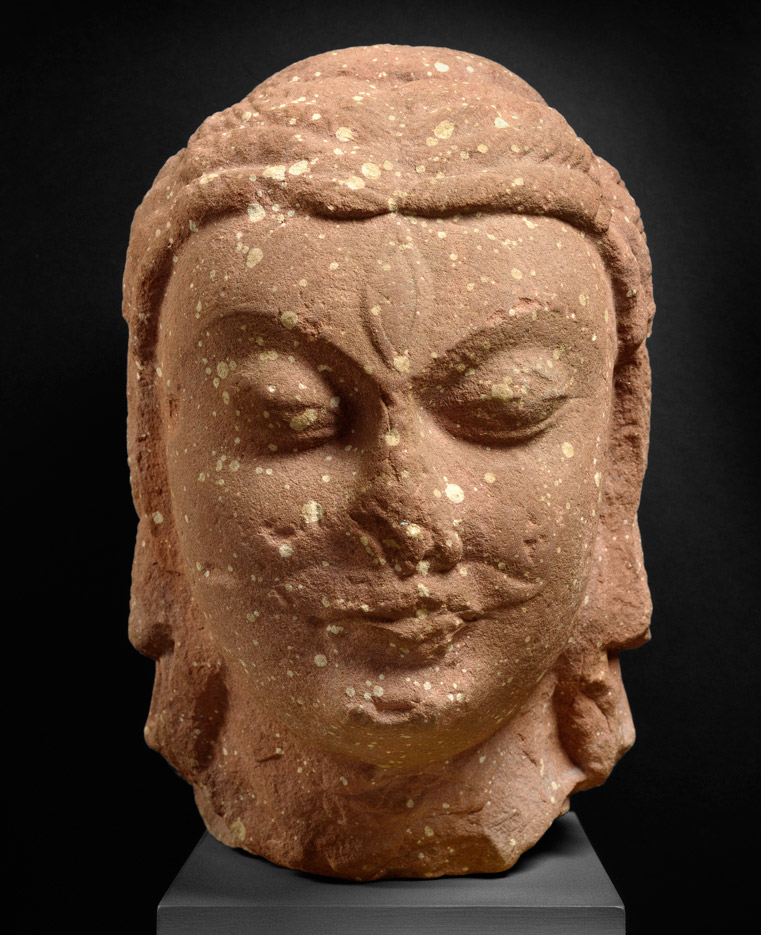 While traveling around Varanasi, Hyecho observed, “The non-believers go naked, covering their skin with ash and worshipping Mahadeva.” The nude or nearly-nude yogins who dedicate their lives to ascetic practices that emulate and honor the god Mahadeva—an epithet of Shiva, depicted here—have captured the attention of pilgrims and travelers to India for millennia, especially on the banks of the Ganges in holy Varanasi. Today, these yogins are commonly known as sadhus.

Sadhus seek to imitate the god in both behavior and appearance: they sanctify their bodies with sacred ash from cremation or ritual fires, and wear their hair in matted locks (jata) to symbolize virility and supernatural power. Shiva’s jata, apparent in this sculptural fragment, control the force of the Ganges as it falls from heaven and serve as the source of his yogic powers. This head of Shiva, with its third eye of yogic insight and curled mustache, may have belonged to a full-length image or to a mukhalinga, the god’s primordial phallic form, from which one or four faces project.