Before Hyecho was born, the Korean monk Wonhyo (617-686) decided to sail to China to study the dharma. Traveling at night, he was caught in a terrible rain storm and took shelter in an abandoned temple. As the water rose around his feet, he became thirsty. Picking up a floating gourd, he dipped it into the water and drank, savoring the sweet taste of the pure rain water. When the sun rose the next morning, Wonhyo realized that he had taken shelter not in a temple but a tomb, that the gourd he drank from was a skull, and the pure water was filled with floating corpses. He experienced a flash of insight into how the mind creates the world, that the purity or foulness of the water he drank was all in his mind. He declared, “The three worlds are merely mind, and all the things of the world are merely consciousness. Clean water and dirty water are in my mind; their true nature is not to be found in the water.” Having determined therefore that there was no reason to seek enlightenment outside of his mind, he decided not to go to China.

Hyecho was born between 700 and 704 in Silla. The kingdom, founded in 57 CE, initially occupied the eastern part of the Korean peninsula. After defeating a Tang Chinese army in 676, Silla gained control over most of the region. Of the so-called “Three Kingdoms” that it unified at this time, Silla was the last to officially adopt Buddhism in 535 (after Goguryeo in 372 and Baekje in 384). By Hyecho’s time, Buddhism was the dominant religion on the peninsula and an important source of royal legitimation.

Some of the great works of Silla Buddhist art that have come down to us, such as Seokguram Grotto (751-774) and Bulguksa Temple (751-790), were completed after Hyecho left Korea. Even so, he came of age in a time when Buddhist culture was thriving in the region. His predecessors, such as the eminent monks Wonhyo (617-686) and Uisang (625–702), traveled to Tang China and back, helping to foster the burgeoning intellectual and material culture of Korean Buddhism.

Hyecho was one of many from the Korean peninsula who traveled abroad—at least forty went to China during the eighth century—though none wandered more extensively than Hyecho. He left Silla when he was no more than twenty years old and may have originally only intended to go as far as China. Yet already by 723 or 724 he departed by sea for South Asia, never to return to his homeland. We do not know precisely what he sought in those faraway lands, but it is clear that his early experiences in Silla inspired him to traverse the permeable membranes between the different cultures and regions of Asia, and to seek out the geographic source of Buddhism.

It is hard to say for certain what Hyecho would have seen before he left the Silla capital, but as a monk, he likely would have been exposed to the rich visual culture of the religion, including many small and large Buddhist images, as well as numerous written texts and oral traditions. He may have even been exposed to luxury trade goods from the far reaches of Asia. He certainly knew about relics that purported to be the physical remains of the Buddha and his disciples. These and other precious objects from abroad could have inspired him to seek Buddhist teachings and sacred sites in China and beyond. 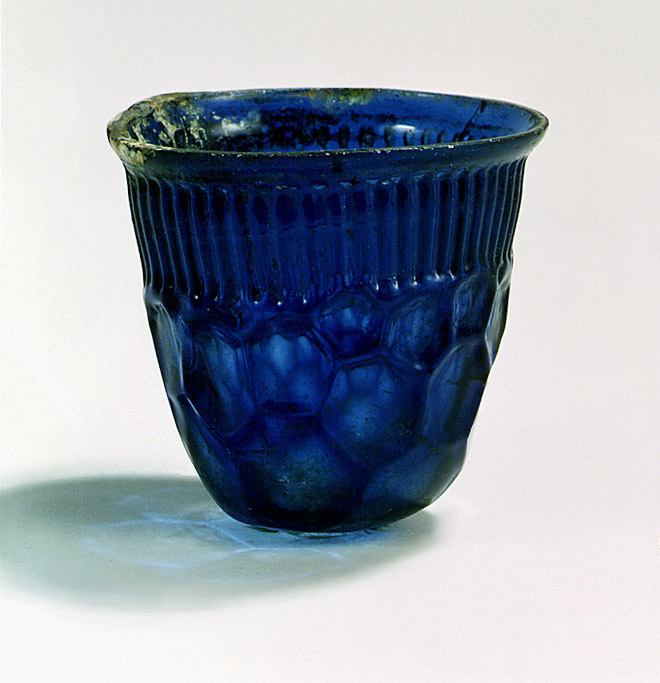 This cup was found in 1973 in a domed tomb located in Hwangnam-dong, Gyeongju, the site of the Silla capital. It is known as the “Heavenly Horse Tomb” (Cheonmachong) because many of the objects found there have images of horses painted on them. Approximately twenty-five glass vessels from the fifth to sixth centuries have been excavated from covered wooden chamber tombs around Gyeongju. Most are from the eastern Mediterranean coast of Sasanian Persia. Such glassware and other metalwork bear witness to the astounding distances objects traversed along the Silk Road. Hyecho himself seems to have made use of the trading networks that tied Asia together, following the routes established by merchant caravans long before his pilgrimage. He may even have traveled to the region in which this cup was made. 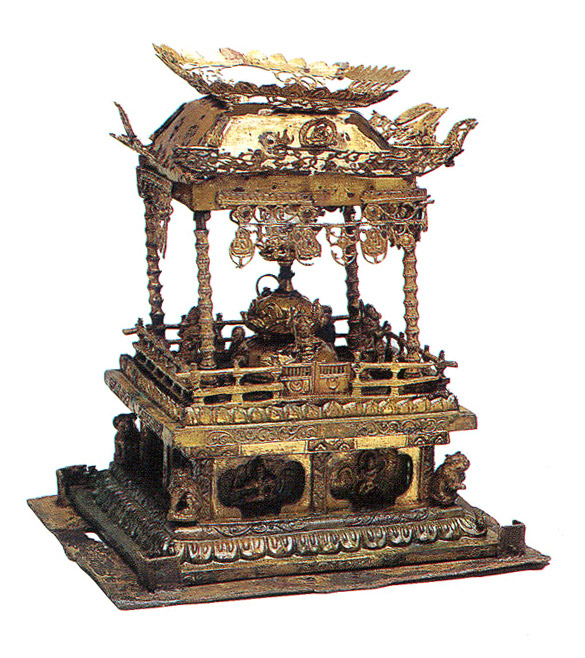 This is one of several reliquaries discovered in the eastern stone pagoda (National Treasure No. 112) at the site of Gameunsa Temple, located on the coast to the east of Gyeongju. It was discovered in 1996 when the pagoda was disassembled for repair. Three parts comprise the reliquary: an outer and inner casket, and a relic bottle that held materials believed to be the bodily remains of the Buddha. The impressive outer casket is the earliest extant reliquary in Korea depicting the Four Guardian Kings, suggesting an association of the relics inside with Mt. Sumeru, the central peak of Buddhist cosmology. The inner casket, which contained the reliquary bottle, is a fanciful miniature architectural structure adorned with sculptures of guardians, lions, and a monk. Elaborate reliquaries such as this can be found throughout Asia and indicate the high degree of reverence in which Buddhists held the remains of the Historical Buddha. However, access to purported relics was tightly controlled and by traveling to South Asia, a monk like Hyecho could forge his own alternative connection to the sacred person and sites of the founder of his religion. 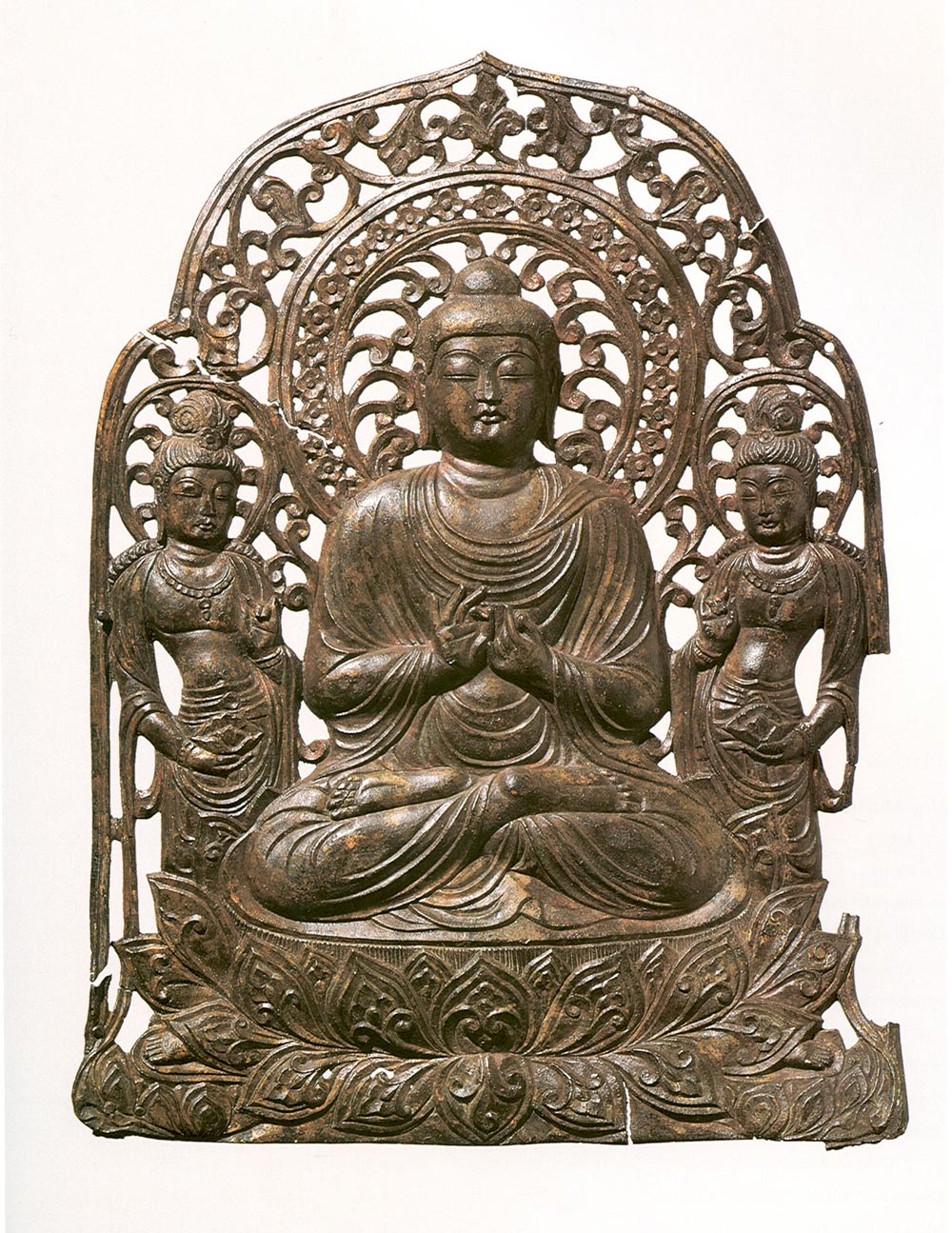 In 674, Munmu (626–681, r. 661–681), the Silla king who unified the Korean peninsula, ordered the construction in the capital of a royal residence that became known as Donggung Palace. Part of the complex was a large pond, later called Anapji. With the fall of the Silla, the site was abandoned. However, a 1974 excavation recovered many striking artifacts, including gold and bronze bowls, gilt ornaments, jewelry, and mirrors, which are now on display in the Gyeongju National Museum. Among these pieces, this bas relief plaque of a buddha with two bodhisattva attendants is particularly significant. The fine metalwork suggests the Silla artist’s high degree of skill and although it is but a fragment of a much larger decorative program, the work evokes some of the splendor of the Silla court after the unification of the peninsula. The inspiration of Tang Chinese art is clear in the round faces, lithe bodies, and elaborate drapery folds.

It is difficult to say for certain what Hyecho would have seen in Silla before he left. However, this sculpture, carved around 720, might provide some clue as to the style of Buddhist art he encountered. It depicts Maitreya, the bodhisattva who in the future will become the next buddha. It is paired with a similar sculpture of Amitabha, the buddha of the paradisiacal Western Pure Land. Both works suggest turns towards faraway places or times in which Buddhist teachings and practices were or would be more robust. Longing for a more authentic and powerful Buddhist experience may have inclined Hyecho to make his great journey.

The style of this work is also outward looking. It reflects a synthesis of late seventh and early eighth century Tang Chinese proportions with local artistic features, such as large eyes, wide faces, and a certain restrained corporeality. Inscriptions on the back of its mandorla tell us that in 719, a high-ranking Silla official named Kim Jiseong (b. 652), founded Gamsansa Temple southeast of Gyeongju, and commissioned these works in memory of his parents and in gratitude to King Seongdeok (d. 737, r. 702–737). In the early 8th century, the Silla government maintained close contacts with Tang China, so it is no surprise that its minister ushered in a new international style inspired by Chinese prototypes.